A Shipping Container Library of Things 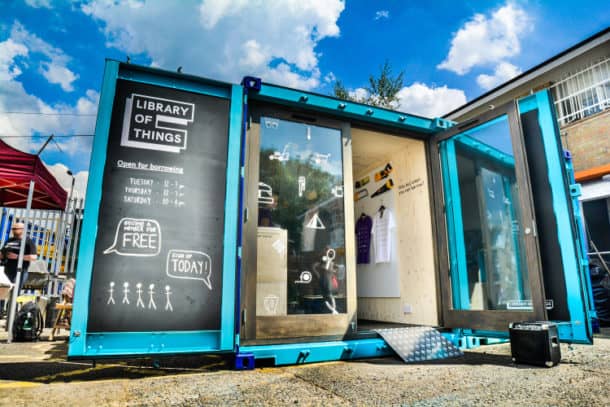 Did you know that the average electric drill is only ever used a total of 13 minutes from the time it is bought for its entire useful life? DIY retailer Bunnings sells a cordless one for AU$299 – or AU$23 a minute of use. Let’s face it, we all have too much stuff lying around our homes that just doesn’t get used. How often do you use your lawnmower or sewing machine? What about that AU$300 circular saw that is rotting in your garage?

What if the community owned this stuff instead? Unless you work for Bunnings and can see its profits plummet before your eyes as communities of 1,000 residents bought one electric drill, a lawnmower, router, and a circular saw (AU$1200 worth of gear) it would make a lot of sense. Forgetting the retailer’s point of view, wouldn’t you prefer to pay say AU$10 a day for one of these tools for that fantastic DIY project you’re doing or occasionally mowing the lawn with, and only pay for when you use it? 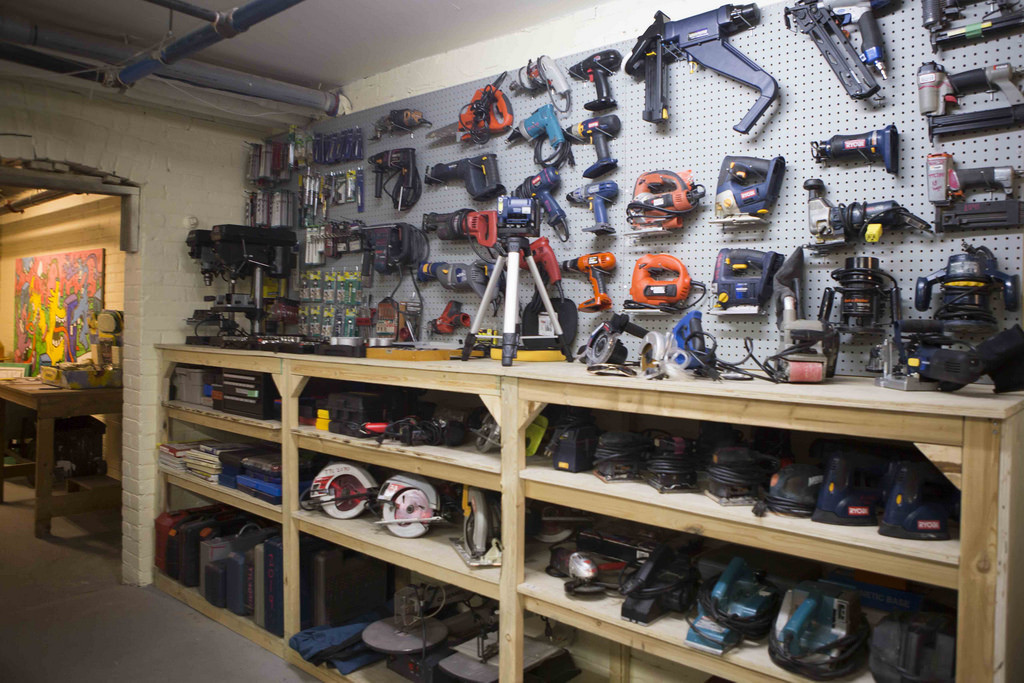 The concept of ‘tool libraries’ came about 40 years ago in Colombus, Ohio. This was run out of the city’s municipal library and funded out of city funds to provide the equipment people hardly use at a reasonable fee. Instead of paying $300 for a piece of kit, they just paid a nominal fee that would eventually cover the cost of the item before the end of its useful life.

Since then the concept has spread across the US. As city government funds have grown smaller, so community nonprofits have taken the projects over. Now it seems the idea is moving to other countries as well, with a number of new ‘libraries of things’ opening in the UK.

You will have almost certainly heard of Uber (the global taxi company) and Airbnb (the room rental company) where ordinary people can earn money from sharing their car or letting people stay in a spare room while on holiday in your town.

There are even yachting social economy companies such as Sailsquare in Italy – most yachts sit around unused for 50 weeks a year and cost in excess of $3,000 to keep at the dock all year so being paid to take someone sailing can help pay the bills! Many cars in cities sit there doing nothing for the bulk of the week as their owners cycle to work and only use the car at weekends if at all. Community car sharing schemes have sprung up around the world where members of a car club contribute via monthly subscription toward the cost of the car while renting it for the few hours / the weekend they actually need it. If you can do that with a car, yacht or spare bedroom, then why not with that lonely lawnmower in the garage?

Tool libraries are not always free to use, though some of them have membership schemes where someone paying AU$20 a month can have unlimited use of their equipment. Most of them are private companies that can only reinvest their profits back into the business, and in other cases nonprofits or charities.

In last week’s blog we showed how Sydney is the third most expensive city to live in the world, while Melbourne ranks sixth – directly above London in the UK at 7th. In cities like these people are renting and buying ever smaller living spaces for ever higher costs. For most in these places they just don’t have the space for a horde of single use electrical equipment. Besides, instead of spending $299 on an electric drill, couldn’t that money be better spent put towards a holiday in Indonesia…?

Looking at libraries of things around the world, most of them are run in disused shops and municipal libraries. Where local rents are acceptable, perhaps in a small market town in the west of England, such community projects can afford to operate without having to pay extreme amounts of money.

In London, however, the three Directors of the Library of Things project found rents a major obstacle. In their blog they said, “We looked at garages, sheds, leaky community spaces, old pubs and commercial spaces in redevelopment. The council were reluctant to work with a young organisation like ours, and private developers expected £50,000 in rent for otherwise unused spaces.” In AU$, this is more like AU$114,000 a year in rent – far above what a community enterprise can expect to take in revenues in their first few years put together! 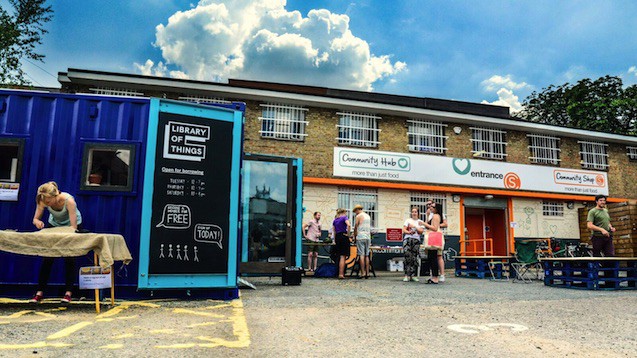 The shipping container concept ticked a lot of boxes:

The team asked London architects Lifeboat Studios to design them a space around the two, 40ft containers. The outcome was two separate spaces, with one a storeroom and the other a shopfront where people can come in to collect and return their gear.

With planning permission from the local authority granted so the project could go ahead, and after eight weeks’ work of converting the bare spaces of the shipping containers into something usable, the project was launched in June 2016.

The spaces are laid out simply. The store room’s walls are lined with open wooden boxes where every item has a home. The office space has the shop space, as well as administrative space, for the three women to operate the business and raise funds to keep it going. 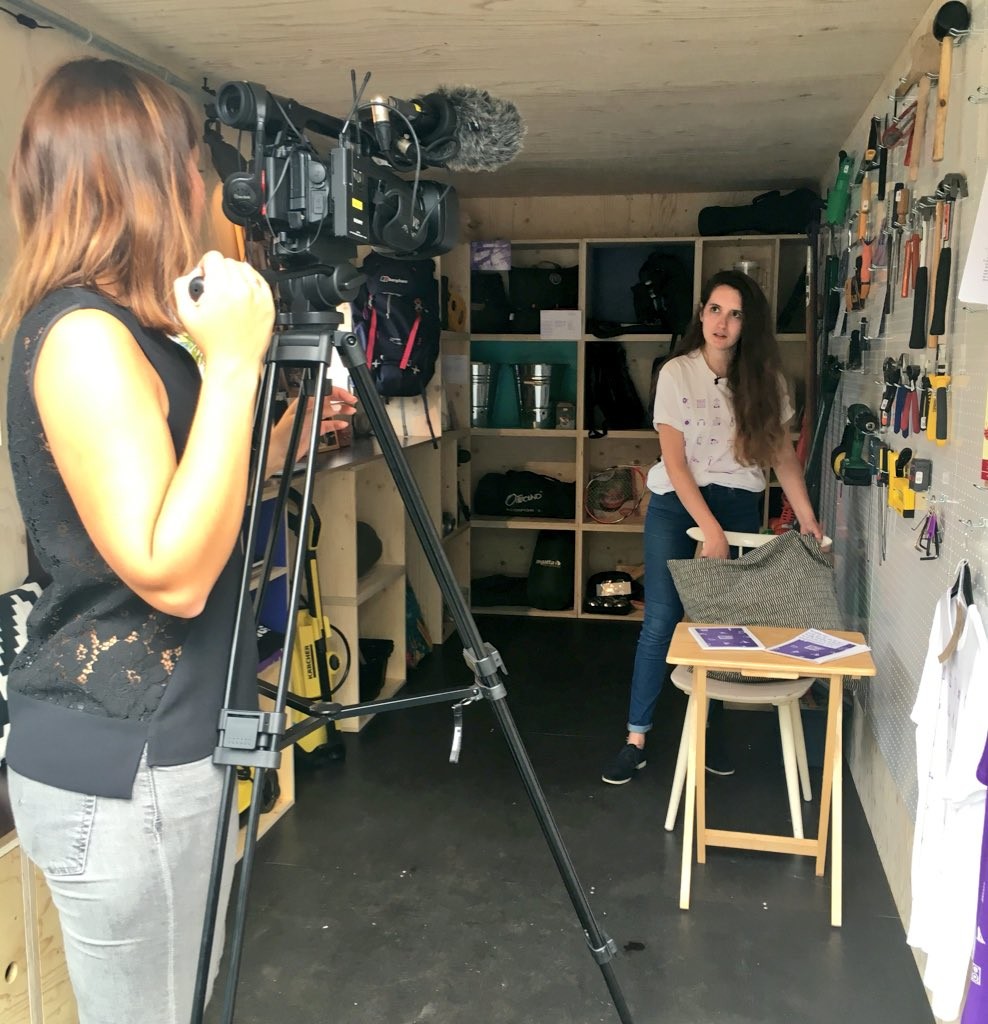 The Library of Things

People who want to use tools or home equipment can sign up online to become members and upon proving their address and ID can borrow the goods they need for a small fee – between AU$1 and AU$20 a day – for the project they are doing. Once used they return it as they would a book at a library.

Looking at their inventory, the range of things that the organisation rents out of their containers is eclectic but you can immediately see how people would buy them to use once and thereafter rarely. They have hiking backpacks, sewing machines, a range of DIY electric tools, lawnmowers and even pressure washers, as well as baking equipment for that occasional Christmas or birthday cake, and so on.

What this does for the community is save money, but it also works for the environment too.

A lot of the electronics on sale today are designed to be obsolete in the next few years. Consequently people may buy something, realise they just don’t get on with it and (sometimes years later) throw it away! Equally those they do get on with may only be for one project, and never see the light of the day again. Where such equipment may have a similar lifespan in the hands of the community, the idea of the concept is that it will be extremely well used before it reaches the end of its serviceable life. An electric drill is designed to be used for thousands of minutes, not 13!

From the supply side of such equipment, how much in the way of resources is put into making an expensive piece of kit that ultimately gets used once? Copper for the wiring, crude oil for the plastics, steel for the fittings. Ultimately by fewer people buying this gear, this pushes back up the supply chain and fewer natural resources are used in making such equipment in the first place.

Potential of this concept? 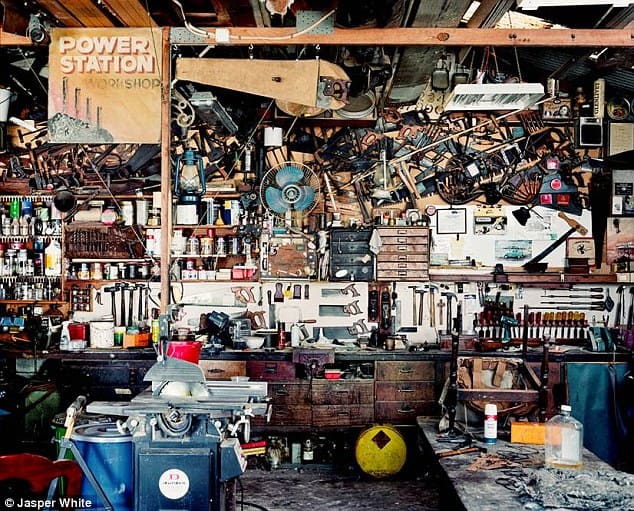 If you were to do an inventory of the junk you have at home, you would be surprised how little you use the stuff you do. If you live far away from any major body of water, what’s that wetsuit doing sitting about? If you are in an urban environment and live a busy urban life, what’s that backpacking gear doing sitting about? Even those living near the beach may not really need that surf canoe or surfboard unless their worlds revolve around surfing / sea kayaking (there are those who are lucky enough to have that but not the bulk of people!).

If you were to honestly do an inventory of the gear you have and sort out what you use heavily, from the stuff that gets used once or twice a year, you’d be surprised at how little you actually need in this life!

This is where community ownership steps in. Tool libraries don’t even need to buy the latest gear every year ether – they often rely on donations from the community by people who realise that their circular saw could be better used every week by different people, than every two years should they get round to ‘that’ project they’ve been meaning to do for a while.

Looking out to other cities in the world, particularly those among the most expensive in the world such as Melbourne and Sydney, the idea of shipping containers as community spaces is something that could enable other community projects such as this to flourish even where rents and mortgages are too high to develop other community spaces. At Gateway Container Sales we can sell you a used shipping container for around AU$3,000 and for another few thousand dollars you can set up the space you need to develop your project to the level that you need. You then just need the flat space in which to place the converted shipping container, and after that you need the human resources to make it all possible. Community activists around the world have the networks with which to develop such a project.

Has the Library of Things got your creativity flowing?

If this concept has helped you find a solution to the problem of needing space for your community project, then get in touch with us at Gateway Container Sales today. You can speak to our friendly sales team who can put you in touch with a range of designers and experts who can help you design and convert the space you need for your own project. Call us today to discuss your needs!