Death in Vegas’ Richard Fearless has a habit of leading the way in modern music. In his new shipping container based studio he has recently created his new solo album using his collection of synthesisers. Reminded he is not the only person on the planet late at night by the factories on this still-industrial length of the River Thames in London, England… 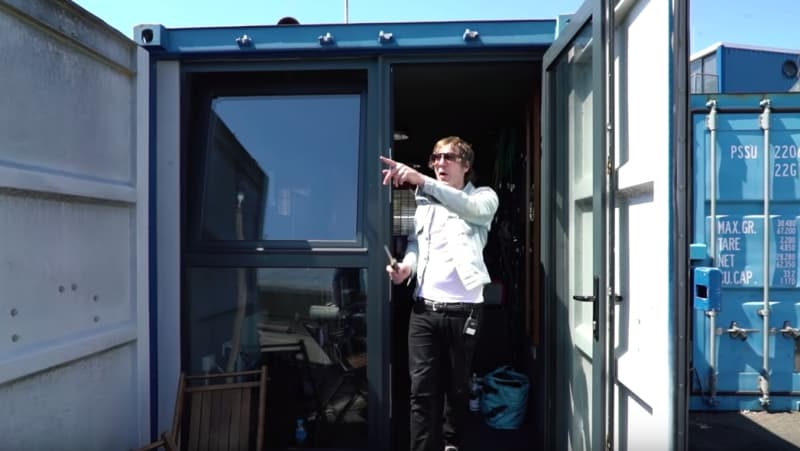 Those who work at night alone can be forgiven for the weird feeling of being the only person alive on the planet. In a shipping container studio this feeling can be compounded with the hard metal box perhaps taking someone off Planet Earth and onto one far away – Mars?

As he is consumed by his work, so singer songwriter and musician Richard Fearless has commented that his studio’s location can rescue him from this feeling. The factory across the River Thames is supplied at night by ships that come from all over the world and humanity does exist nearby.

Speaking to The Playground music agent’s website, Fearless said of his studio, “I’m situated where the river Lee meets the Thames, facing the water with a huge steel factory opposite. This factory gets most of its deliveries by boat, so when I’m working through the night, it’s fantastic having the sound of metal on metal and knowing you’re not the only person left on earth, which sometimes it feels like. The location has been a huge influence and the horizon across the river has added a much needed sense of space. The location has a somewhat Ballardian feel. Under the gaze of the Docklands (London’s financial centre) and under the shadow of the Millennium Dome (now called the O2 centre).”

The River Lee is a major tributary to the Thames that passes through the Home Counties north of London, and has been a part of British civilisation and mythos for Millennia. At the point where Fearless’ studio sits it meets Old Father Thames, the Lee delivers its magical waters into the sea. At the confluence of the ancient power and magic of the lifeblood of old British mythos and commerce, so Fearless makes his music and leads the way, trendsetting and leading one of the most famous music industries in the world as he does so. 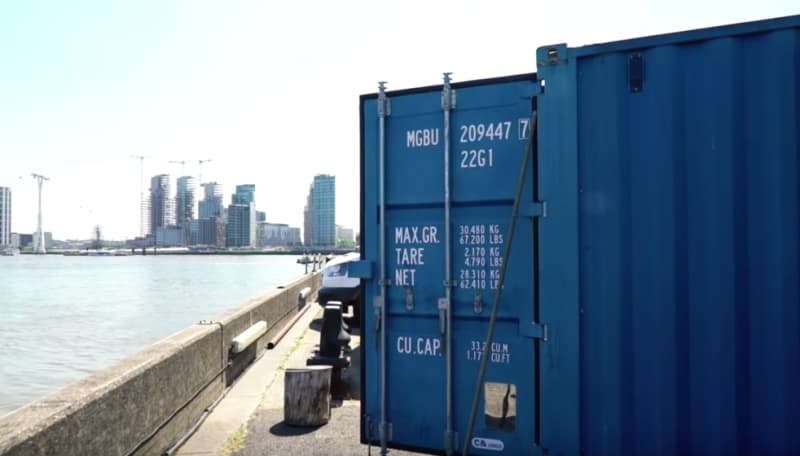 In the daytime Canary Wharf and the Docklands wakes up, as Britain’s relatively new financial economy pulses and drives. At this time of day, so Fearless rests and works with his wife at his new Drone music label that is based close-by.

As to the container?

Hard, unforgiving yet equally mercilessly practical for what he needs to do, the shipping container is a perfect setup for what the artist needs. As with river systems, music production is part science and part magic – what better place for a sorcerer of music to ply their trade? See a video about the container studio here:

Fearless is not the first to produce music in shipping containers – have a look around the Gateway Gazette for other examples we have covered over the years. He is the one and only though to have one in the location he does, and when you listen to what he produces you will fully appreciate that magic.

If this article has triggered some thoughts about your own shipping container project, then do give us a call, or get a free quote. For very little cost you can buy a used shipping container, move it and convert it with very few practical issues.