Droughts and Soil Erosion – Could Shipping Container Farms Save Us? 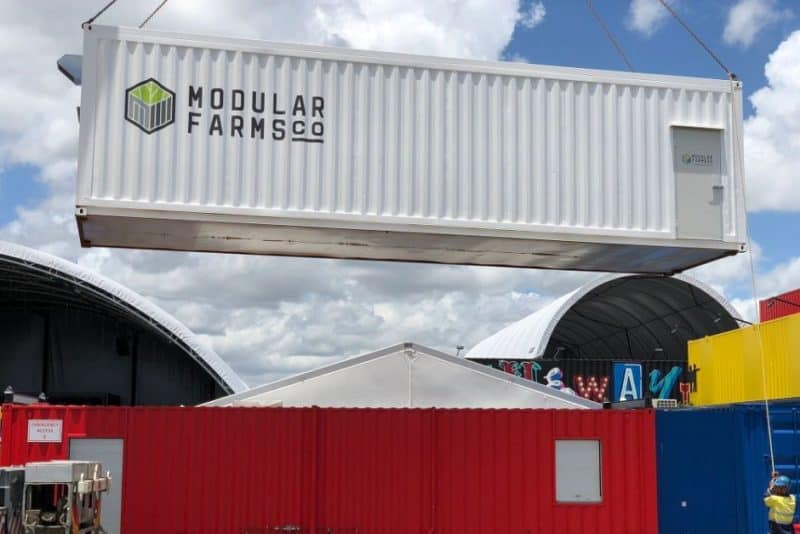 A new shipping container farm has opened in Brisbane, supplying local businesses with herbs and vegetables that may otherwise have had to be imported from far away. The farm owner went into container farming due to drought on his own land. With our ever less predictable climate, there’s a risk that what arable topsoil we have left will be gone in our children’s lifetimes. Could container farming be a solution that keeps the human race going when all else has failed?

Modular Farms Australia director, James Pateras, is a third generation farmer who has land in Victoria and was affected by the long term drought in the state that came close to bringing the farm to its knees. He said to ABC, “I think the climate and adverse weather events are the biggest challenges to traditional farming, followed by disease.”

The farm in question is a container based system that protects the food growing outside from the climate and creates a perfect environment for growing herbs and lettuces inside “we can grow up to 1,000 heads of lettuce a week, so about 52,000 lettuce heads a year,” says James. Fruits, such as strawberries can also be grown in the container farm.

Grow lights and a hydroponic system using rock wool as a substrate for the roots, allow for maximum yield to be attained every day of the year, regardless of the weather outside.

The farm is right in the heart of Brisbane and close to the city’s famous restaurants, so the ‘food miles’ involved hardly register between farm and plate. Local restauranteur Peter Dressler of the Poulet & Porc eatery in Brisbane told ABC, “I have tried the modular farm’s basil, varieties of kale and coriander and they got the tick from me. We yet have to see if it all works but for us it’s about getting the consistency.” 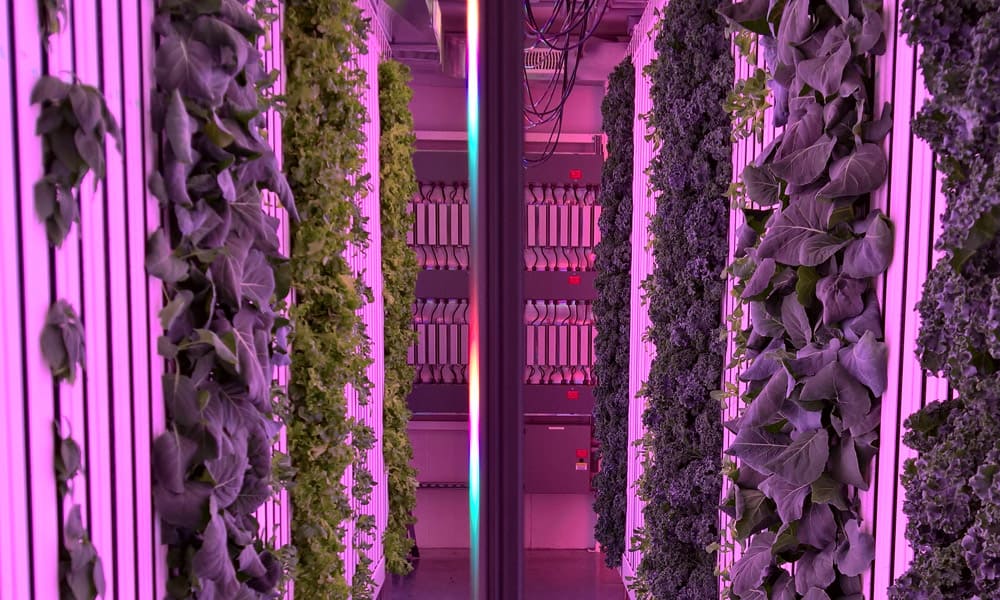 Modular Farms is a company originally based in Canada, and has recently set up shop over here in Australia. According to the website, “We design and manufacture container farm systems that can be used to grow food in most locations on earth.”

That can mean supplying drought hit areas in the Outback with good food even in a location where it is impossible to grow any due to the present climate. It can also mean feeding people with nutritious greens who are on financial hard times in cities like Brisbane or Sydney. While the system cannot grow all the food groups that humans need to survive, such as starch from root vegetables and oils from seed crops, it can help with certain vitamins and minerals that aren’t available eating heavily processed food.

Though iron is in abundance in the soil of Australia, it is made biologically available in greens such as kale that can be grown indoors.

The company has a basic system that can have modules bolted onto as productivity need arises. To the Primary Module the following elements can be attached: 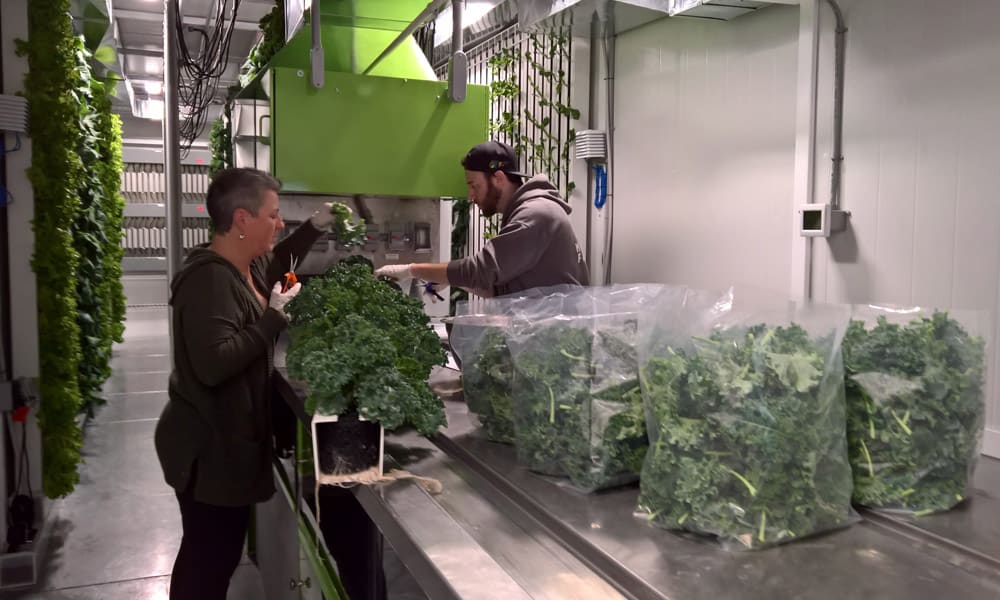 Another important facet of this system is that it is very economical in water use. The Australian Food Services News reported, “With a focus on sustainability, Modular Farms’s hydroponic, closed-loop system uses 95% less water than a typical outdoor farm.” Where water is at a premium, then it could actually make sense for farmers who have outdoor land available to set up an indoor farm so they are not wasting water on their crops outdoors.

A final issue is energy. Energy costs resources and money – whether the diesel of a tractor / harvesting unit or getting the food to market, energy conservation can equally be about cost reduction as it is about reducing carbon emissions. A container farm only uses 30% of the energy from field to plate that equivalent outdoor crops can use. That reduces costs across the food chain that can end up in the price of food being reduced or even the farmer having a fatter bottom line for the food they sell.

These systems aren’t for any old chancer with a few thousand bucks in their pocket and no clue about food production. Being effectively a laboratory environment it is important that the seeds are sterile from outside bacteria as one could end up giving things like salmonella to your customers. Disease can decimate the farm, which being very dense as far as tonnage per acre is concerned can mean ruin on your part.

Those with a willingness to learn the unique processes involved in indoor farming can do very well, even so. More city dwellers may be needed to learn the science of indoor grows like this. Why? Our once stable and fertile world is changing for the worse and no matter how far humanity advances we aren’t reversing the ravages we and our forefathers are wreaking on the world.

Topsoil erosion – the most pressing crisis of our time? 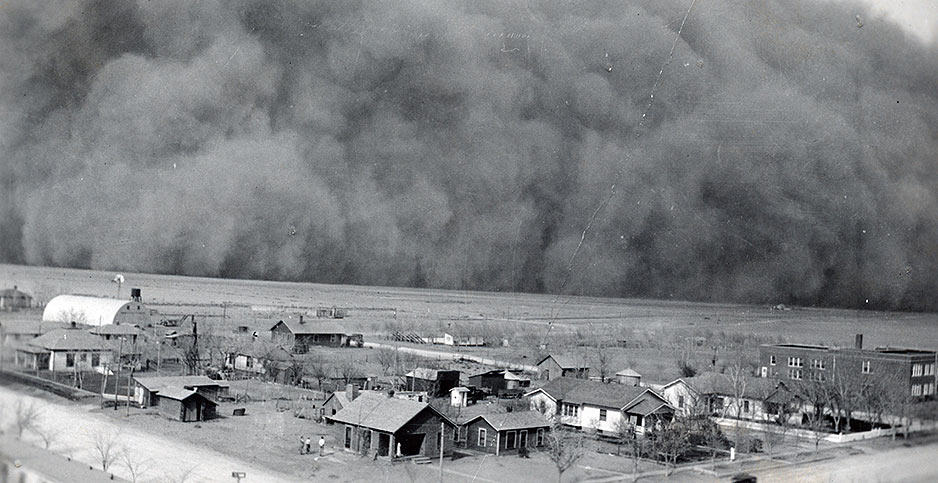 Let’s face it, manmade Climate Change is a contentious issue here in Australia with not all those in our halls of power necessarily believing it. The United Nations have flagged up something that is another worry that we as a species need to think about – topsoil erosion.

Drought isn’t just about losing access to water. When the soil is bone dry it can be whisked away in the wind. Topsoil is the first 10 or so centimetres of soil from the surface that is full of the nutrients that feed the plants that we and our animals need to eat to survive. When that’s gone due to the lack of rain, roots and wind, the soil loses its fertility.

Things have got so bad worldwide that the UN estimated in 2012 that humanity’s arable farms had just 60 harvests left before we cannot grow any more crops. This was an average – the Popular Science blog reported, “because although in the United Kingdom that number is one hundred harvests and in the United States the number is even higher, for other parts of the world—think Africa, India, China, and parts of South America, where the human population is largest and growing ever larger—the number of remaining harvests is lower, meaning that in fewer than sixty years the topsoil will no longer support the growing and harvesting of food.”

For us the conditions of topsoil loss are upon us. The farms blighted by years of scorching summers and no rain are losing the soil that once made them viable. This happened in the 1930’s in the United States. The stocks and shares website The Balance reported, “once farmers settled the prairies, they plowed over 5.2 million acres of the deep-rooted grass. Years of over-cultivation meant the soil lost its richness. When the drought killed off the crops, high winds blew the remaining topsoil away. Parts of the Midwest still have not recovered.”

Unless a new way of growing food is found then we could be relying on ever more food imports from countries that only have so many harvests to feed themselves.

As we indicated above, container farms can’t yet answer every arable need. We won’t get bread, potatoes, fruit or cooking oils from them anytime soon. However, conceivably in the near future some crops that might have been grown outdoors could be grown indoors in shipping containers while allowing the other crops to use that shrinking amount of land instead.

This really is a case of squeezing the sponge dry while technologists working for NASA and other agencies focus on helping humanity survive using other indoor growing techniques. For the moment, modular container farms emphatically aren’t the saviours of Mankind but they could be the direction we heed as the necessity of technology provides answers to the problems that we as a species have created by urbanising and trying to get away from relying on nature.

This blog is brought to you by Gateway Container Sales. Based in Brisbane, Australia, we have hundreds of shipping containers in stock for sale and hire. We also have a network of experts who can help you design and build your shipping container project whether it’s a shipping container home or a container farm. Give us a call today or email us to discuss your needs. Get a free quote.