Shipping containers have come to dominate land and sea transport with their fixed size and durability. For various reasons they haven’t been used for air freight except where absolutely necessary. One issue is the cost – air freight can cost six times as much to deliver goods over the same distance over land or by sea! The heavier the load, the more costly too if you are air freighting. Lately, however, there has been interest in using shipping containers for a multimodal route (that is to say, a route by air, sea rail and road) to get goods to their destination at the right speed with minimal time spent unpacking those goods from shipping containers.

The simple answer is because of weight and size. The empty weight of a 20ft shipping container is 2.3 tonnes, and that is a lot of excess weight to carry over long distances – the fuel costs for air freight are huge as it is and that’s without considering the weight of the box. Shipping containers are built for outdoor use and to take abuse from nature – not something they would generally experience in a temperature controlled aircraft’s hold. Instead, air freight companies tend to use special air freight containers that are designed to be as light as possible yet still protect the goods in the box. These special air freight containers can lead a relatively charmed life by comparison to the ocean bound shipping container, as they are moved outside only briefly between hangar and aircraft!

The other issue is size. Shipping containers aren’t regularly used in everyday air cargo operations because they are too big to fit on a normal sized aircraft but there are a number of special aircraft that can carry them quite easily due to the size of their main payload bay. However, shipping containers are used from time to time for air freight, where the shipping container can’t be unpacked for military security reasons, or where the goods inside are so fragile that they cannot be unpacked and repacked again such as pharmaceutical products.

The most commonly used heavy lift air freighter is the Boeing 747F which can carry huge loads, it can carry 140 tonnes of cargo (the equivalent of five fully loaded 20ft shipping containers) and can fly 4,390 nautical miles with this load. Where speed is paramount, then using a 747F is the right way to go. Though the total cargo weight is 140 tonnes, this is split between two levels – the aircraft isn’t just an ‘empty tube’ as with other air freighters. Twenty foot low cube shipping containers can fit on the upper deck but not in the lower holds.

Another one of the most commonly used aircrafts to carry shipping containers is the Hercules HC-130, the workhorse of the military, that can carry everything from tanks, to troops into war zones, and air dropping several tonnes of aid to desperate people after a disaster. The makers of the Hercules, Lockheed Martin, also make a civilian version of the aircraft, called the LM-100J. 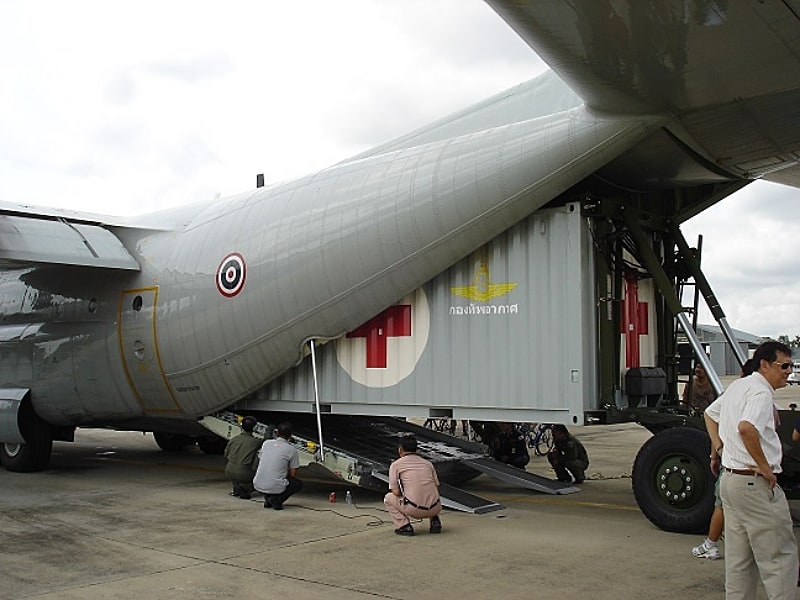 Where the Boeing 747F jumbo jet air freighter uses jet engines, the Hercules is far slower but a lot more economical. It uses turbo props instead of jet engines, and travels at speeds of no more than 660km/h. They trade off the speed for economy. It is smaller and slower than the Boeing 747F but can carry bulkier loads due to the size of the payload space.

One of the weaknesses of a traditional fixed wing cargo aircraft is that they need a landing strip nearby – unless of course you are parachuting the goods out of the back of the plane as the military do! Even in this case you can’t drop containers with fragile goods, such as communications equipment, on a parachute.

A Bedfordshire, England company is developing special cargo carrying airships that will be able to get very heavy loads into and out of remote places around the world that have no landing strip nearby. The US military paid the company Airlander US$60 million to develop an airship that can get heavy cargo to even the remotest places in the world without the need for an airstrip.

The Airlander is a mixture of airship and fixed wing aircraft. Its shape means that with propulsion it generates lift in much the same way as a normal aircraft, but because it has helium in the body, 60% of its lift is because it is lighter than air. Find out more about the project in the video:

The prototype Airlander 10 has a payload capacity of 10 tonnes – half the capacity of the Hercules. However, the company has designed the Airlander 50 that will be able to carry up to 50 tonnes of cargo. This equates to two 40ft shipping containers that are loaded to around 80% of their maximum weight. It will be operational from the early 2020’s.

Once the Airlander is fully operational it will mean that air cargo companies can carry far greater loads for much less cost than they do at present. Because the Airlander never really lands – just hovers above the ground – they can carry loads to literally anywhere in the world. The company claims that it will be able to do this for a lower cost per kilometre than by bush road transport, let alone by air!

One trade off however is speed. Where the Hercules can travel at 660km/h the Airlander can only go at a maximum speed of 195km/h. Again this weakness is offset by the sheer range of the aircraft – it can travel for four days at this speed without running out of fuel, 18,720 km – a similar distance between Europe and Australia. This blows the Hercules and the Boeing 747F out of the skies!

Where all the aircraft above are at least at prototype stage, there is one aircraft that hasn’t quite left the drawing board. Boeing recently patented the design of a special aircraft that is built to carry a large number of standard shipping containers.

Essentially, a row of shipping containers would be left on the tarmac at an airport, and the new Boeing aircraft would roll over them, lower itself down to pick them up, and then lift itself up again for take off. This differs from the Boeing 747F in that the containers are not loaded into a cargo space – they are on the outside of the aircraft. This would significantly reduce the time required to load and unload them against the time it takes to do the same job with modern day air freighters. The aircraft would then take off in the normal way and fly to its destination, as you can see in the video.

A downside to this concept is that shipping containers are not very aerodynamic, and this would reduce the fuel economy of the concept aircraft. Given that the costs of jet fuel are very high, and are likely go go far higher, it will be interesting to see how the design comes about – if of course it is ever fully rolled out.

Economy: the major issue of all air freight…

When you have a long drive to see friends or family, you will pay more on fuel for the same distance if you put your foot down and drove at 120kph the whole way than you would if you drove at 95kph. The same applies for air freight against sea freight. Experts in the shipping industry only advise air freight as an option if the goods need to be somewhere urgently, or if they have a high enough value that the cost of air freight will be absorbed easily in the freight costs.

Need to think inside the box for your next project?

Then contact the team at Gateway Container Sales and Hire. They’ll help you get in touch with the right sort of tradespeople and advisors to ensure that your ideas for building a shipping container structure are actually feasible. Once it’s time for construction, they’ll supply you with the second hand shipping containers you need for the job.  Go on – give them a call, and get a free quote for your next project today!

One thought on “Emerging Transport Innovations: Shipping Containers on Planes”