Fuel of the Future: Containerships Move to LNG to Meet Pollution Limits

At the beginning of 2016, the world’s first Liquefied Natural Gas (LNG) container ship, the Issa Bella entered service between Puerto Rico and Fort Lauderdale. This ship could well be the beginning of a cleaner, greener revolution in powering ships around the world.

Shipping companies around the world are looking to convert their ships’ engines to be powered with LNG due to pollution limits being set by the United Nations. Currently there are nearly 70 LNG container ships on order and the first dual fuel conversion in the world’s container ship fleet is set to happen in 2017.

What do they run on now?

Most large ships travelling the world’s oceans are not powered by the sort of diesel you get in the gas station. That is far cleaner than the muck the biggest ship engines use! Instead of refined diesel, many large ship engines use something called Heavy Fuel Oil that is black, sticky and full to the brim of pollutants. Given that there is a pressing need to address climate change, and much of the world’s trade is dependent on heavy fuel oil powered ships, the United Nations (UN) international shipping organisation the International Maritime Organisation (IMO) has set strict limits on the amount of sulphur emissions that must be met by 2025. This is forcing shipping companies to look at new ways of powering their ships, and LNG is the most likely answer. 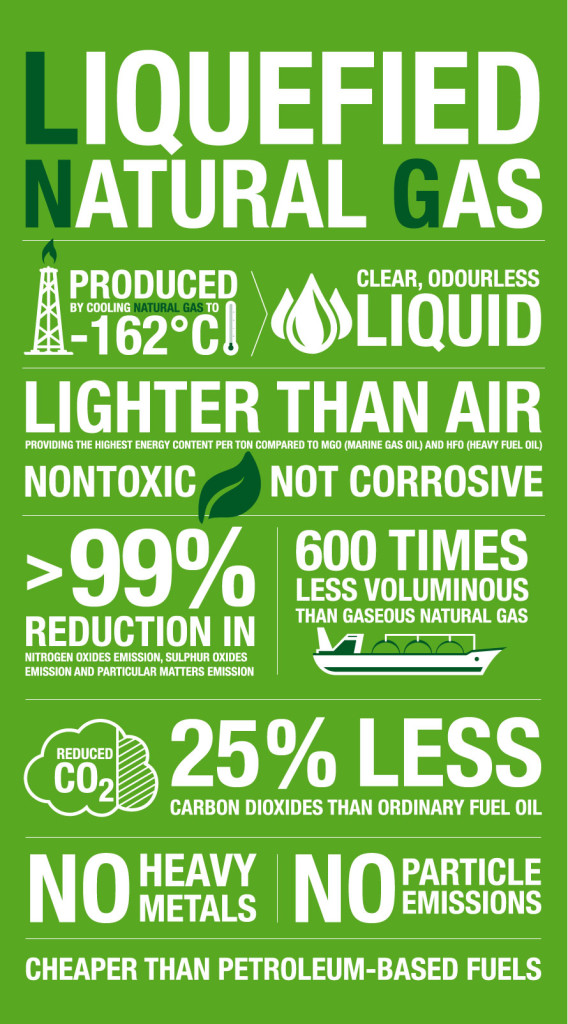 LNG is a fossil fuel that comes from similar wells to that of oil and diesel. At room temperature it is a gas, but when chilled to -162 degrees C it is a liquid. It is one of the cleanest fossil fuels on the market, and produces around 60% of the power per litre of diesel.

A shipping news website showed how much cleaner the Issa Bella’s propulsion system is than her heavy fuel oil counterparts: “considerable reductions in particulate matter (PM) by 99%, sulphur oxide (SOx) emissions by 98%, carbon dioxide (CO2) emissions by 71% and nitrous oxide (NOx) emissions by 91%.”

LNG should not be confused with the Liquefied Petroleum Gas (LPG) you see in cars and taxis. LPG is a by-product of producing petrol for cars, and has a lower calorific value than LNG. Once more, you can’t guarantee LPG’s calorific value as it varies. LPG will never be used in larger engines (for a 10 litre truck engine and up) as it isn’t as economical or reliable as diesel and LNG.

LNG is being increasingly used for large engines such as the 10 litre engines used in trucks but right up to the 4000 litre engines that are used in container ships today. It is all very well making a ship that can be fuelled with this green gas but there is a major problem: the world’s ports need to put bunkering facilities in place to power them as without the infrastructure it just isn’t going to happen. Currently, the likes of TOTE (the owners of Issa Bella) have to deliver the fuel to their ships by truck. A ship will burn more than 70 tonnes of LNG a day, or roughly two tanker trucks full!

A typical container ship will ply the world’s oceans for 25 years. Given that there are only eight years to go until all ships have to meet IMO targets, to keep a ship in operation they will need to convert their existing engines. This doesn’t take much of an effort, with the greatest issue being to fit an LNG fuel tank. The ‘dual fuel conversion’ means that the ship’s engine will run either on fuel oil or LNG. According to GCaptain, the first container ship to be converted will be the German ship the Wes Amelie. She is a small, 1036 TEU ship (the biggest in the world carry 18000 TEUs) but even so is a step in the right direction.

LNG is cheaper than fuel oil so moving across should see a return on investment. According to the industry magazine Ship and Bunker, the LNG conversion will pay for itself through using cheaper LNG: “Overall, we see payback periods today of 2-5 years for many vessels, so despite the relative affordability of oil, going to gas can still pass boardroom scrutiny, and more importantly, secure an important long term competitive advantage.”

The fuel of the future?

Given that the IMO is pressing for ships to meet new pollution targets and that a ship converted to LNG will cost less to run than on heavy fuel oil, it seems that LNG is the way to go. There are other technologies in competition such as ‘scrubbers’ that clean the pollutants from the exhaust, but given that ship engines last longer on LNG without major repairs, it looks to be the fuel of the future for the world’s container ships. While every fossil fuel burned contributes to climate change in some way, this is a country mile better than the muck ships burn today so should significantly reduce the impact of global trade on the environment.

This post is brought to you by Gateway Container Sales out of Brisbane, Australia. We sell on used shipping containers for reuse in a variety of ways, check out our blog for ideas and more articles. If you want to reuse a shipping container in any way you could imagine, call our sales team to discuss your needs or get a free quote!