Two liquefied natural gas (LNG) powered containerships now serve the island of Puerto Rico, justifying the construction and delivery of a LNG bunker barge that has now been delivered to the island. Let’s first of all look at the Marlin Class container ships and then look at the new barge that has been built to fuel them. 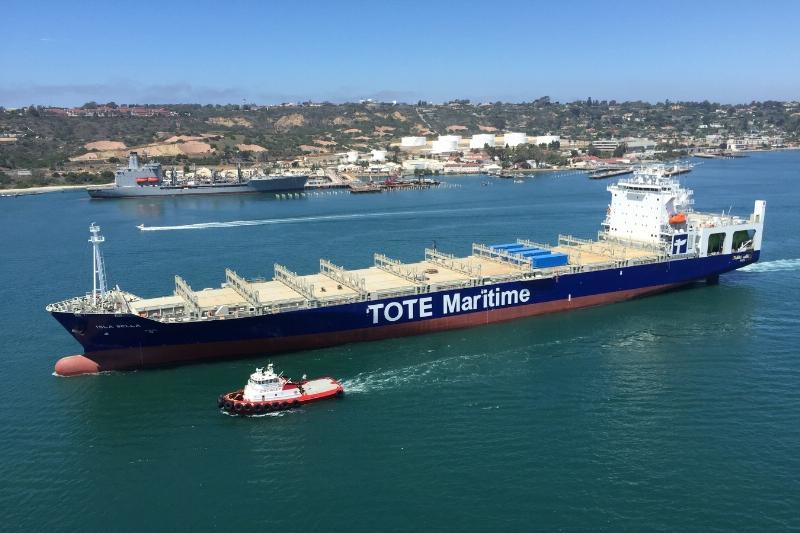 In 2012 the container shipping line Tote announced that it would build two LNG powered containerships to serve the Island of Puerto Rico. While a number of container ships have been built to be ‘LNG ready’, these two vessels run on LNG from the start of their careers. We featured a post on the LNG containerships early last year where you can see the christening of the Issa Bella.

The 764ft ships have a 106ft beam and a maximum speed of 22knots, enabling them to carry many of the goods required for life on the Caribbean dependency of the United States. They carry everything from fruit to food, pharmaceuticals and even trucks and cars to help the economy of Puerto Rico.

For the first few years of operation, the vessels were bunkered by truck in Jacksonville Florida. However, you need a lot of trucks to fill the tank of a 764 foot ship! With the growing demand for low carbon emission container ships in the region, there was an economic justification to build a LNG bunker barge that could be filled with fuel at an oil refinery and then moved to Port Jacksonville where it can refuel a number of ships. This reduces the overall carbon intensity of using LNG on the ships by virtue that multiple truck diesel engines aren’t involved in loading the fuel into the ships.

According to an article in The Maritime Executive, “The Clean Jacksonville was constructed at Conrad Orange Shipyard in Texas, with gas trials undertaken in Port Fourchon, LA. The vessel, with a 2,200 cubic meter LNG capacity, will enter service for TOTE Maritime Puerto Rico in the Port of Jacksonville, Florida.”

The Clean Jacksonville ticks another box too – one of the issues in rolling out a global LNG containership fleet has been the difficulty in bunkering such ships in places where the infrastructure doesn’t stretch to this fuel. In having a self propelled bunkering barge, in theory it is possible to move LNG anywhere in the world to bunker ships, even thousands of miles from the nearest oil refinery that produces that gas. With the logistics in place, it really is only a case of moving the barge to where you need it in order to keep your ships topped up with their fuel as they go around the world.

A video of the Clean Jacksonville’s construction can be seen below.

So what’s this about LNG?

Many large ships run on fuel oil, which might be described as a much thicker, dirtier version of diesel. When burned in a ship’s engine, fuel oil releases lots of toxic emissions. Particulates and nitrogen dioxide are very bad for the environment, as is sulphur dioxide. Particulates from global shipping can affect the weather as the soot can have the effect of seeding clouds, while the gases released contribute significantly to man-made global warming. There have been pushes from national and regional governments such as the European Union and United States for shipping lines to clean up their acts. The two Marlin Class container ships in question lead the field in moving towards a lower carbon shipping industry worldwide.

Now these two vessels have been in operation for the last three years, the technology is mature enough that other vessels with dual fuel and LNG fuelling systems can operate around the world. Indeed, it is demand from other shipping companies that has made the new barge feasible over the long-term.