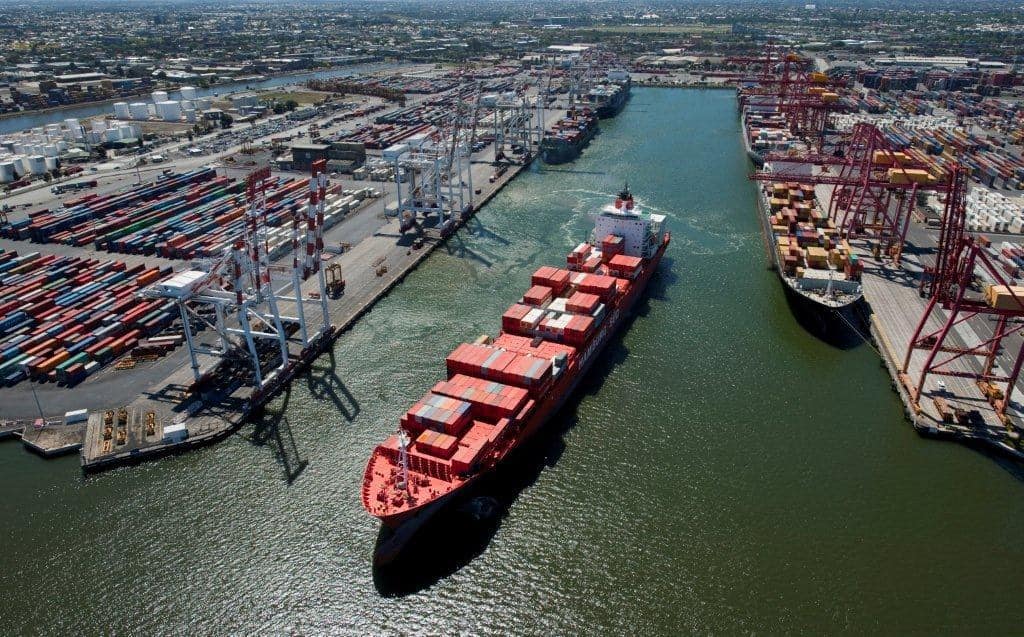 As it charges forward to its target capacity of 8 million TEU capacity, the Port of Melbourne has broken an Australian record in the last year, handling 3.018 million TEUs of shipping containers. Will the locals let it reach higher?

Twenty-foot Equivalent Units are the units by which containers are measured. They come in 20ft and 40ft sizes, so they can be stacked and handled using standardised equipment.

Around 89% of the boxes handled went inshore, while around 11% headed across the Bass Strait to Tasmania.

Melbourne has a huge hinterland. To the west around 500 miles away is Adelaide which takes fewer international liners than Melbourne, while to the east a similar distance is Sydney. If all things were even that would give Melbourne a 500 mile wide space in which to serve – and a lot more than that inland.

In 2017 The Age reported, Melbourne “now proposes to roughly triple the port’s capacity to between 7 million and 8 million shipping containers a year.” The newspaper reported that this hasn’t sat well with locals who have to deal with all the extra traffic from the port as it heads off to the businesses receiving the goods.

One solution mooted is to have a flyover for container-carrying trucks to pass over the suburbs of the city. The Age reported, “The proposed road, called “Freight Link”, would snake for five kilometres from Webb Dock at the foot of the West Gate Bridge through Port Melbourne, across the Yarra River and join with the Western Distributor, Transurban’s planned toll road.”

A clash of residents vs port?

Many ports around the world developed in an age when goods were handled differently and in smaller units. Thanks to most folks using (if lucky) horses and carts to get to work there were dense urban developments around those ports.

With containerisation and higher mobility among the population, having a port a few miles from an urban centre is not an issue for those who operate it. Ports also need extra space for storing containers in transit. With older port models there are often clashes between the home owning public and the ports the housing amasses around. Many ports have languished and died for a lack of decent infrastructure about them as the voting public made local politicians queasy about allowing unalloyed growth.

The Age again: “Experts in planning and logistics said putting new roads and heavy truck traffic next to suburbia was a recipe for conflict, as seen in long-running battles between residents and freight operators in Melbourne’s inner west.”

Is the 8 million possible?

While the 3 million TEU mark is to be celebrated on the part of the Port of Melbourne, its stated intention of more than doubling that is a big ask unless decisions can be made that won’t irritate the local residents. No matter how fat your lobbying budget, you aren’t going to win against a resistant neighbouring resident public…