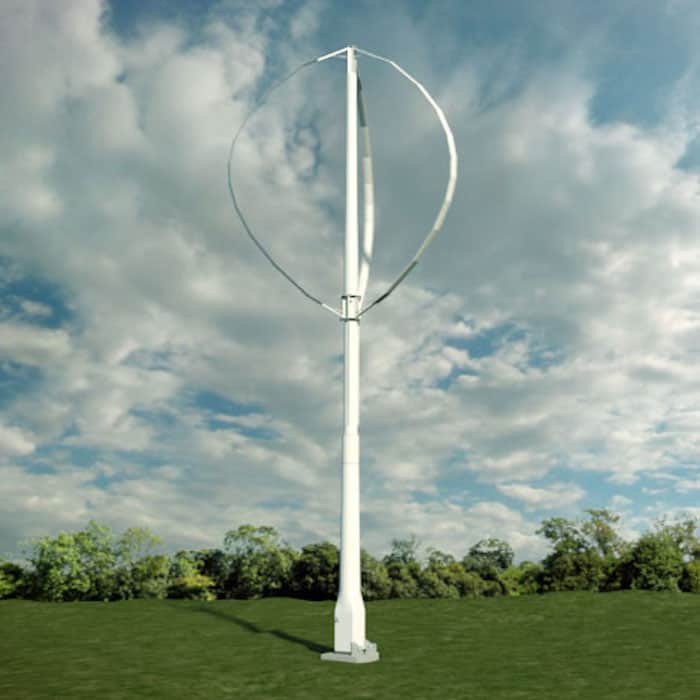 One of the novel systems on the Wind e20 is that it uses a vertical axis blade system, with the blades spinning around the mast as opposed to off a hub at the top. The blades are connected to an axle that turns the motor-generator at the base of the mast.

Horizontal axis ‘windmill’ style wind turbines aren’t as easy to run as you may think. They are tall and noisy which has led to claims of ‘wind turbine syndrome’ among their detractors.

The horizontal axis systems can be hard to maintain – their moving parts can be very high above the ground and when something goes wrong it can require a lot of resources and time to fix. If the mast is wide enough someone has to climb a ladder inside to get to the generator – you can imagine how happy they’d be if they left a spanner on the ground, 100 metres below!

Winds come from different directions. The horizontal axis system has to turn the blades to the optimal direction to benefit.

Horizontal axis turbines tend to require large concrete pads and foundations. It takes a tonne of carbon to make a tonne of concrete, which reduces the environmental benefits of using the wind turbine in the first place. For a 100ft tall turbine it can require several tonnes of concrete, so to start generating CO2 reductions it has to be in operation for a while to even get to the start line…

How the Wind e20 addresses these issues 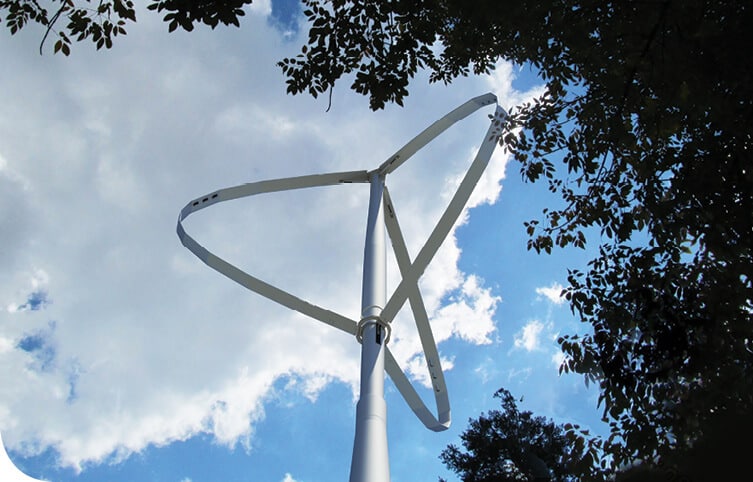 The Wind e20 is not designed for industrial wind farm use. It can only manage 65kW of power at full capacity and stands 105 ft tall. This can power a school or an office block, so for smaller scale operations this can make them carbon neutral after a certain amount of time.

The system is designed to be moved in a shipping container with the blades on a flatbed truck. Once unloaded from the truck, the system unfolds itself and in just a few days a crew can get it up and running. It does not require a concrete pad for its foundations, and can in theory be moved from location to location as necessary.

When it comes to maintenance the system has the generator at the base. This means that in most cases, the turbine can be maintained or repaired without someone climbing a ladder or being sent up in a cherry picker to do the job.

The system does not need to be turned to meet different wind directions and can operate at maximum efficiency whatever the wind direction. Where it comes to strong winds the turbine blades can be folded flat against the mast, allowing for the storm to pass without problems associated with high winds damaging the system.

Bird strikes are said to be minimal relative to horizontal wind turbines, so school children at a school with a system like this aren’t confronted with diced birdies as they go to school every day. The wind turbine is also far quieter than the horizontal axis system so there should also be fewer allegations of ‘wind turbine syndrome’.

This video gives a short demonstration of how the Wind e20 works.

One of the answers to the ongoing problem of grid electricity being at 95% or greater capacity is to have homes and businesses generate their own electricity through ‘micro-generation’ systems. These might be batteries, solar panels or wind turbines. Portable generation systems that are small enough to power a city block, office block or school can help regional electricity grid systems by reducing the load on them.

The Wind e-20 is one solution that can help tackle these load issues, especially in regions of the world where there is generally good wind conditions. Being shipping container portable, the wind turbine can also power sites temporarily too – perhaps civil engineering works, for example.

Does your next project need a second hand shipping container?