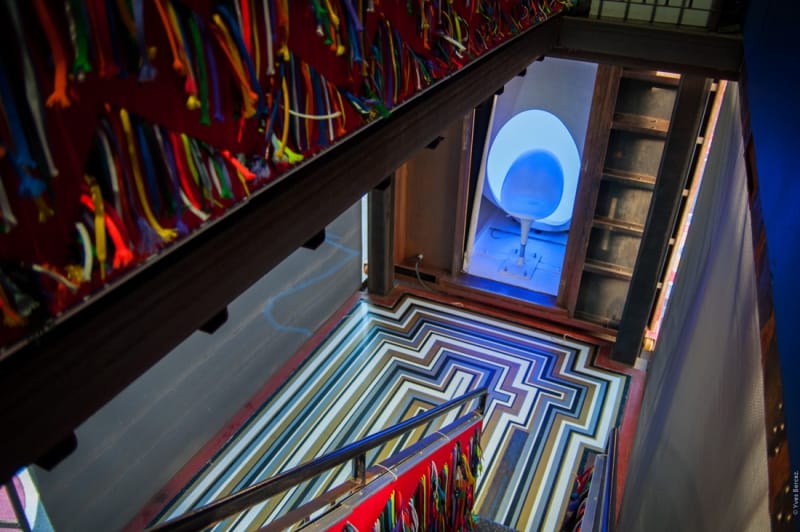 Let’s start with Musee Mobile that began its journey in France before showing young African children modern art for the first time. 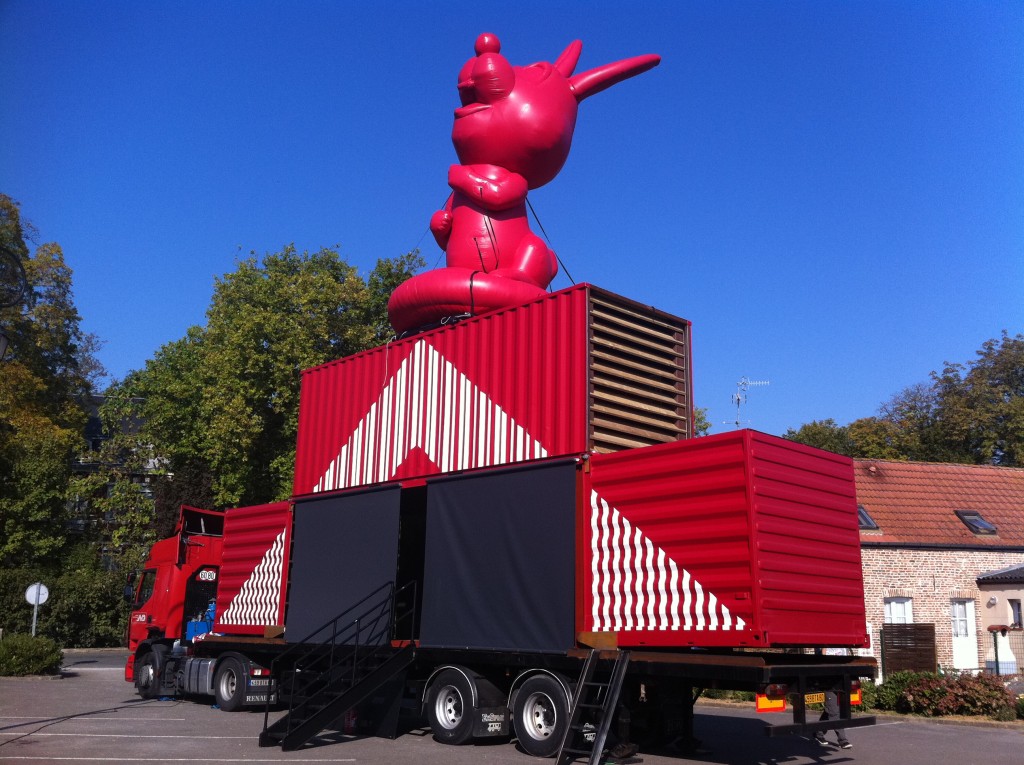 Containers are known for their ability to bring enclosed spaces to almost anywhere in the world. They are built to be strong, and with relatively little effort are easily transported from place to place.

The curators of Musee Mobile (MuMo) took these important facets and created a modern art museum that was transported by truck across France and then the deserts of North Africa. It was designed to bring art to children who don’t have geographical access to it normally. The curator, Ingrid Brochard, won financial support from a number of major French companies and commissioned artworks specially for the project that were loaned by the artists for the journey.

School pupils went into the museum, unaccompanied by any teacher but guided by child psychologists Donatello Caprioglio and Olivia Agostini. In being away from their teachers, so they were guided in gaining the insights that only a young imagination could give. Importantly, no adults were allowed into the museum other than the child psychologists – one day they may but this is just for children!

Whether a giant inflatable pink rabbit suspended from a roof, or watching a deer covered in paint through a keyhole, their imaginations were stimulated by 15 different artists who participated in the project. It will be interesting to find out the differences in perceptions from the French and African kids – the French will have been exposed to such art before yet the children from Cameroon and Cote d’Ivoire may have never seen art in their young lives. 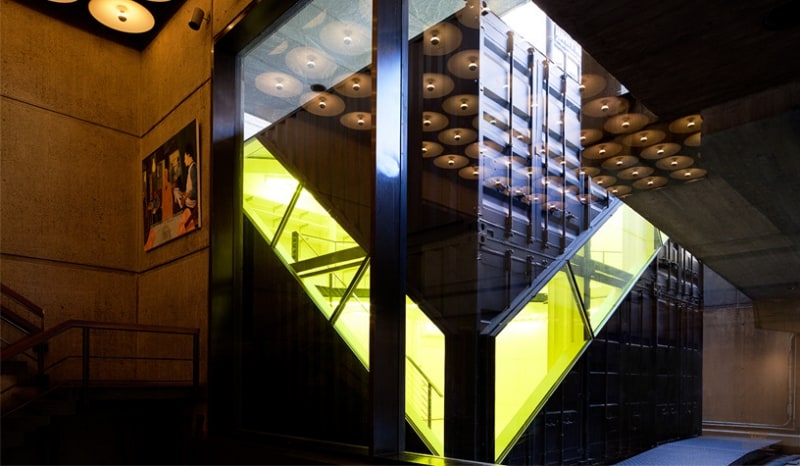 At the Whitney Museum of American Art, six shipping containers were placed in the museum’s moat. Modified on the outside with coloured glass panels, they were precisely arranged to form a minimalist cube. From the outside you could see the yellow glass windows that stretched diagonally from the floor, twenty feet to the roof that allowed natural light in.

The temporary space was given over to education, including art making for children and adults. Within the cube was a stairwell that enabled access to the space, and the walls and space within were available for additional art space. As with other shipping container buildings they were prefabricated off-site (this time in New Jersey) before being driven down to Manhattan and craned onto the site. The 20ft x 20ft x 20ft cube was a striking addition to the New York street scene.

Have a look at this video of the installation below: 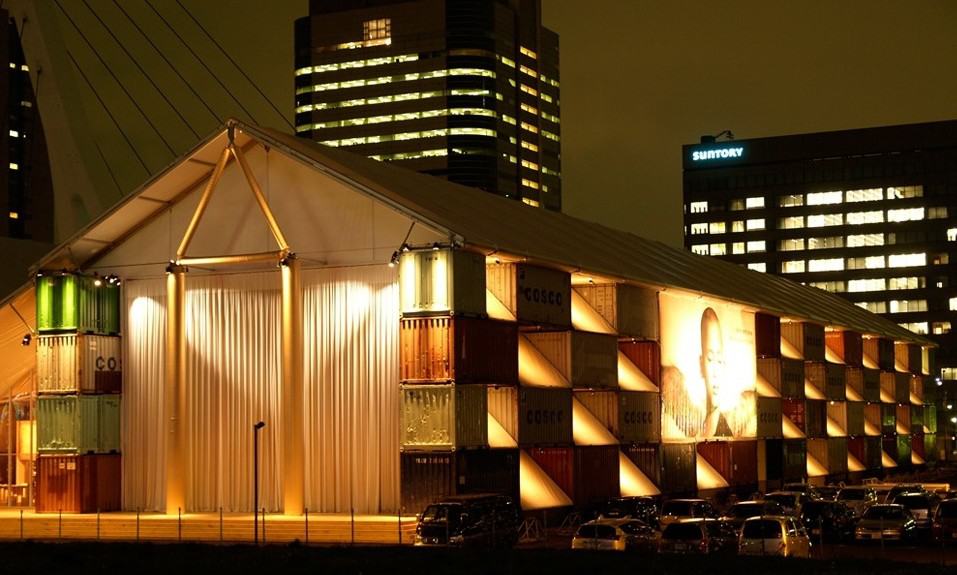 Japanese artist Shigeru Ban’s shipping container art museum in Santa Monica was designed to house an exhibition of large-scale photographic works by naturalist film maker Gregory Colbert. His exhibition ‘Ashes and Snow’ was to enable people to understand their interaction with animals. The mobile Nomadic Museum was first debuted in New York and was later expanded for further presentations in Santa Monica, California.

In terms of construction the museum had to be strong yet light – with a major earthquake in the area only a few years before, local building regulations demanded that any temporary building that was in place for longer than three months had to meet permanent building regulations that included earthquake mitigation. Containers as such were a brilliant aspect to this as they are of solid yet flexible construction and with the right foundations could withstand the impact of the earth shifting beneath.

The building used 152 containers, some of which were 20ft and others that were 40ft in length. They were stacked four high in a ‘chequerboard’ format to allow light into the building yet using their proven interlocking systems to add stability and strength to the structure. In the spaces of the walls, the artist used PVC panelling to allow light in but to weatherproof the building at the same time.

The roof was held up with two sonotubes, that are designed for pouring concrete, and smaller trusses came off these to support the tented roof. Other than the containers themselves, the installation within only filled six containers for rapid deconstruction and removal to the next location for the museum.

Ready to create your own shipping container art museum?

Have you an idea to impact children’s or adults’ minds with your artworks? Shipping containers come in a variety of sizes and with some simple modifications can make the ideal exhibition space. Give our team of shipping container experts a call and we will happily discuss your needs.