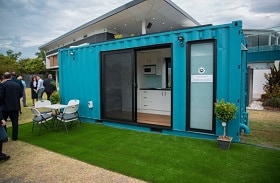 A Queensland school has donated a shipping container bolthole to a domestic violence charity to extend its accommodation for those escaping from abusive relationships.

Domestic violence is a growing problem in Australia, with women, men and children having to make a run for it when they are physically and mentally abused by their partners. The Sheldon, QLD based Maybanke Accommodation and Crisis Support charity has recently expanded its accommodation thanks to a grant from local government.

QLD Minister for the Prevention of Domestic and Family Violence Di Farmer visited the Maybanke site in December 2019 where she said, “The most dangerous time for a woman in a violent relationship is when she makes the brave decision to leave, which is why it’s so important we continue to make sure there are safe places to stay.”

At the same time as Maybanke was developing its resources, Sheldon College donated a shipping container bolthole to the charity, designed by two of its former students.

Two former students Dayna Wilson and Anna Sideris were affected by learning of the domestic violence problem while at the school. “Anna and I both felt that it was extremely important to do something practical for domestic violence victims – hence our goal of creating a unit of safe temporary accommodation for them,” stated Dayna Wilson.

At their Technology Design Class they came up with the design for temporary accommodation for domestic violence victims. A family in the community donated a shipping container and the college fitted the shipping container out to their design.

The CommCube – a shipping container transformed into a shelter for domestic violence victims – was launched at Sheldon College this morning. pic.twitter.com/vd38J0ZvN4

The 20ft container is not designed for long-term living but contains the basics someone needs to have in the early days of crisis – a bed, kitchenette and shower-room/toilet. Though it needs to be plumbed into the water and sewerage network, it has solar panels to reduce the costs of running it to the charity.

After Wilson and Sideris left the school, the project was completed and the container bolthole – now named the Comm Cube – was donated to the Maybanke charity.

Wlson continued, “We are so happy to see this project come to fruition, and it is very rewarding to know that people will have somewhere to go, had they need to get out of an abusive situation.”

A good use of industrial waste

By far the majority of shipping containers are effectively dumped as industrial waste thanks to the imbalance of trade between the manufacturing centres of East Asia and market economies of Australasia, Europe and the Americas. Using perfectly good and long-lasting containers for accommodation of this type is energy saving and ultimately an excellent form of recycling.

If you look around Gateway Gazette you will see accommodation units big and small being made out of shipping containers. They are increasingly being seen as a cheap yet very effective construction block for architecture in a wide range of ultimate uses.

Why not give us a call at Gateway Container Sales in Brisbane to discuss your needs for a shipping container (or more than one) to convert into accommodation? Whether an apartment block or a humble domestic violence bolthole, there are almost no limits to which they can be converted.