Could shipping container housing be a solution to house indigenous peoples on their lands and reserves? Millions of people are in unsuitable housing, and as we have discussed on the Gateway Gazette before, converted shipping container housing is a cheap yet comfortable solution for a whole range of housing needs. One tribe in Canada has begun a pilot scheme to house a family and if this works out, the Bearspaw First Nation plan to roll this out across their community.

Indigenous people around the world have had a cultural collision with those who have settled in their lands from Europe. In many cases once nomadic peoples have been forced to reside in one place while the lands they once owned and roamed across have been exploited by Europeans. The indigenous peoples who were once proud and noble have been left to rot in conditions that are unsuitable for their cultures. Their cultures have evolved over thousands of years and Europeans only really around for a few hundred at best. Governments have housed them but in sometimes extremely poor conditions.

In March 2013 the Ogala Sioux Tribe transported a 40 year old, two bedroomed home to Washington DC that at one stage had 12 people living in it – yet could very easily be transported on a flatbed truck. Speaking to Indian Country Today Media Network, a Lakota Sioux Indian housing worker, Henry Red Cloud, said, “The main message is that housing is a huge need for throughout the First Nation communities. When the nation’s capital faces a huge need, things get done—they just need to see our huge needs as well.”

Where Red Cloud was speaking of the North American indigenous people, his comments often ring true for aboriginals right around the world. Australian blogger Iain Hall wrote of a similar problem in Australia in 2009, “The problem for so many bureaucrats, activists and latte sippers is that they are just not capable of thinking outside the square to finding housing solutions that solve the problems at a reasonable cost.” 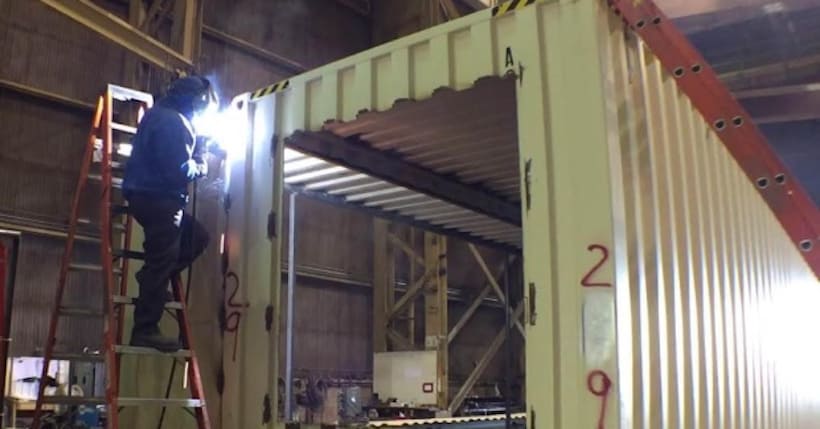 Located around 100km south of Calgary in Alberta, Canada, the Bearspaw First Nation has announced it is developing a 1,260 square foot shipping container home for an extended First Nation family. Unlike the rusty old shack that the Sioux took to Washington DC in March 2013, this is designed to look and feel like a large, modern home and to last decades into the future.

The home being designed and built by a local fabrication company consists of four comfortable bedrooms upstairs and two bedrooms downstairs with a spacious living room and kitchen for the family to live in during the day.

One of the strengths of developing shipping container homes is that the containers are modular blocks, and with some cutting, bracing and welding can be extended in almost any direction laterally or vertically. Consequently they are very easy to build in minimum time and don’t have to appear to be a steel box that the indigenous residents are ‘stored in’. As can be seen in the featured image of the home at the top of this post, a person seeing this for the first time wouldn’t be able to immediately guess that this is a shipping container home. Yet it has so many of the benefits that shipping container homes offer for those who can’t afford traditional housing.

The pilot project home is being partly funded by an insurance claim made by the family after their last home burned down last year, and is being part funded by the Bearspaw community. The Canadian government has announced plans to release C$400 million for housing First Nation peoples, and it is hoped that this shipping container concept can lead to far better housing solutions for people who have otherwise lived in very poor housing for many generations.

As a next step, the Bearspaw community are already planning on building a second home for another family in Morley, Alberta in 2017. Could other governments and peoples consider following suit and repurpose shipping containers as safe, warm and comfortable housing for the peoples who first lived on their lands?

Want to build an affordable home out of a shipping container?

Here at Gateway Container Sales we have many years of experience in helping people find housing solutions from shipping containers. Whether you want a modest tiny home getaway in the outback or a large and comfortable luxury home in the suburbs, contact us to us to discuss your needs today and we will help you turn your dreams into reality!