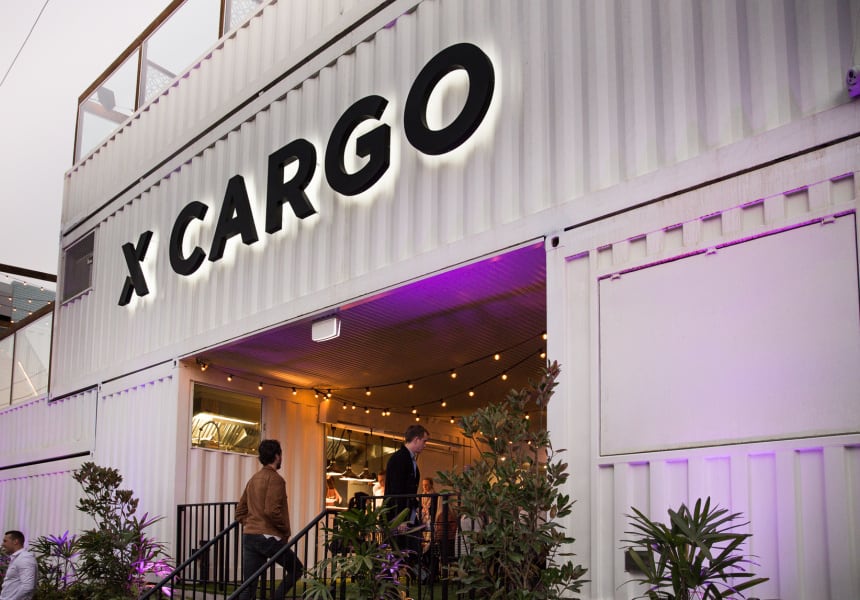 In August last year a shipping container eating and drinking hub called X-Cargo opened in Brisbane. The new site both goes head to head with the city’s Eat Street and supports the city in becoming a foodie’s paradise.

Originally planned for opening in 2017 but delayed due to objections from local residents in Fortitude Valley, X-Cargo is both designed to be a buzzing social hub yet a temporary venue at the same time. It’s open from 7am until late, seven days a week.

When the plans for the site were approved in August 2017, director Aydan Sturgess said:

“We have designed this to be the most Instagrammable venue in Queensland. There will be cactuses and pink neon, but we also want it to be quite classic and quite minimalist. The shipping containers were an obvious choice because of the versatility, you can dress them up or dress them down.”

The 1255 square metre lot was earmarked for development, but no plans had yet been put in place for a permanent construction. That’s why the venue is made of repurposed shipping containers – the units could be rapidly built yet almost as quickly removed when permanent plans are put in place for the site.

What Brisbane gets for the temporary use of the brownfield site is another red-hot night spot for people young, old and with their dogs! 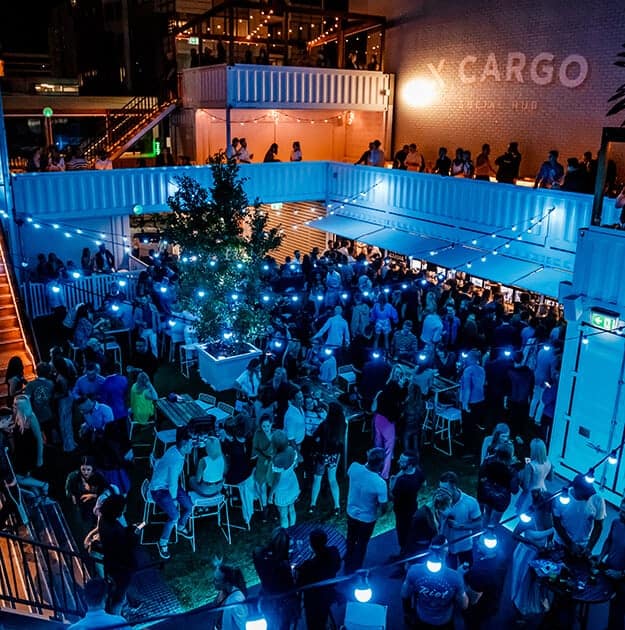 Co-founder Leah Cattanach told the Brisbane Broadsheet, “McLachlan Street doesn’t have a lot [there] at the moment, but this is the future of development in the Valley. I don’t think we’ll be the only one [around there] in the future.”

The Brisbane Broadsheet continued, “The bars offer beer and wine on-tap, as well as cocktails and spirits. The kitchen serves American-style food with Latin influences, such as burgers, bug rolls and an 11-hour pork neck. The cafe component dishes up simple grab-and-go fare, as well as dishes such as smoked salmon, Philly cheese, dill and herb sauce on toast.” Essentially you can eat and drink yourself stupid in what is now one of the best social venues in the whole city. In the weeks immediately after opening X-Cargo had more than 300 venue hire bookings and was extremely busy at weekends.

It isn’t just about over-consumption of an evening. Open at 7am this means that passing commuters (and those with hangovers who haven’t been to bed yet) can have a great breakfast as they watch the world emerging. Street stalls are at the venue from early morning on, adding to the variety of food (and even dog food) for the delectation of customers and their pets.

Eat Street: adding to the zing of Brisbane

X-Cargo isn’t the first such container based social spot in the world or even in Brisbane. On the city’s waterfront there is the Eat Street foodie venue that has been going for many years.

Referring to Eat Street, Sturgess said, “We wanted [X-Cargo] to be a comprehensive venue so when you look at it, it’s not a cut-and-paste job, there’s uniformity to it and it’s done well from every angle, every angle has been designed.” 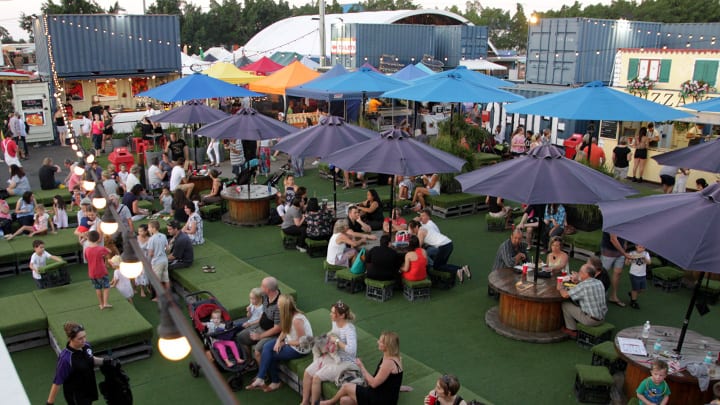 Eat Street is one of the best places to eat delicious local fare in Queensland. Conde Nast Traveller described the place:

It “is a brightly coloured street lined with upcycled shipping containers serving authentic cuisine from around the world. The street has a range of food from hotdogs, pizzas and doughnuts to delicious Thai, Japanese and Indian cuisine. The street opens up with live performances and rides every weekend from 4 PM to 10 PM on Friday and Saturday and beginning at 12 PM till 8 PM on Sundays.”

The first tip Visit Brisbane gives is: “Bring cash, plenty of cash – chances are you’ll walk in, see something delicious, scream “shut up and take my money” for which you don’t want the delay of an ATM queue. Some stalls carry eftpos, but at the very least you require $2.50 cash to pay entry.”

Locals warn that before you go to East Street you need to have space in your stomach for quite some digestion. Don’t eat for a good few hours – not even a sneaky snack – as your digestive tract needs to be ready for what your mind will demand of it. While Visit Brisbane suggest you go in before you’re hungry that will soon change as your nose is regaled with a variety of sweet and savoury smells that will get your mouth watering very quickly. You’ll then assault your digestive tract with a 5-10 course meal from different cuisines around the world. If you’re old enough this can also be lubricated with a wide variety of liquid refreshments.

With Eat Street and X-Cargo, Brisbane is really blessed for food and drink venues where people can spend many hours eating, drinking and enjoying one another’s company as they consume their culinary way around the world. The shipping containers that make the venues what they are, are very appropriate in this regard as they reflect the globalised nature of the food and drink you can consume while on a weekend.

Brisbane based Gateway Container Sales can help you out with repurposed shipping containers if you are after building a site like X-Cargo or Eat Street. Quick to construct yet extremely on-trend, venues of this kind can be extremely profitable, even over a few years should the lease of the site demand.

They are proven as great places for restauranteurs to test concepts on the public as a stepping stone to more permanent venues, and where there is demand from the public for new cuisine there will always be entrepreneurs seeking to fulfil that demand. For city councils it can mean vacant brownfield sites are reinvigorated too, helping drive the local economy and drawing life to otherwise less economically active areas of a city. Just take a look at X-Cargo and Eat Street to see how it is done well!