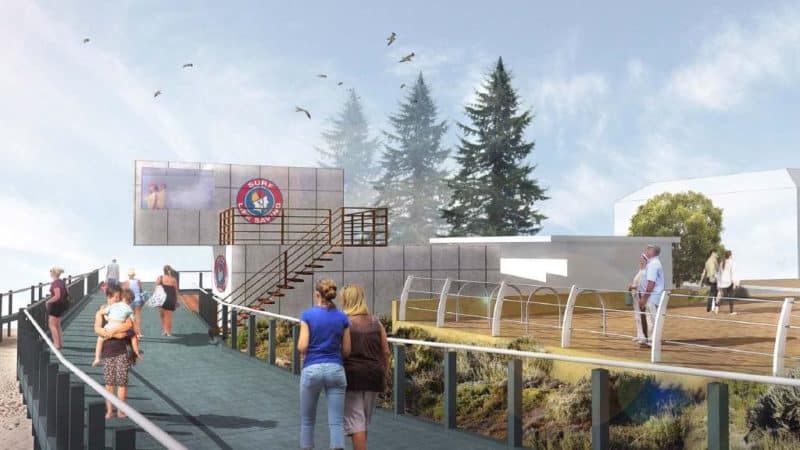 After much battling with local aesthetes the Seacliff Surf Life Saving Club in South Australia has had the plans approved for a new shipping container surf watchtower.

While not new, the idea is a good one.  For a relatively low cost the community organisation can get their lifeguards high enough to, not only watch the part of the beach they officially patrol, but the bits that solo surfers and swimmers can go. Let’s look at this and other surf / water sports container towers that have been built in Australia, New Zealand and Denmark.

With its illustrious history as a major regional surfing centre, Red Beach Surf Lifesaving Club‘s facilities in Auckland were in need of a bit of a revamp. The same forces of the ocean that make for great waves can also shorten the live of a building by many years.

Just because the buildings were worn out doesn’t mean to say the 1,200 members were! The show had to go on, renovations of the site or no. The solution came from a 20ft shipping container with some scaffold on top, from which the volunteer lifeguards would watch the beach.

This is a classic example of how shipping containers can be dropped into place rapidly and put into use, whatever the need may be. The container itself was used as a storage area for lifesaving equipment.

Money came to the rescue and after a couple of years’ use, the club raised enough money for a base that included a tower, changing facilities, training facilities and a cafe for visitors. Did they use shipping containers? Sadly, no – despite the cost savings to be made from partially fitting the facilities out offsite and quickly constructing it on-site.

Perhaps most importantly, short of diving into a crack in the Earth’s surface brought about by even a severe earthquake, the shipping container construction should remain intact and save on reconstruction costs.

Seacliff goes for a permanent construction 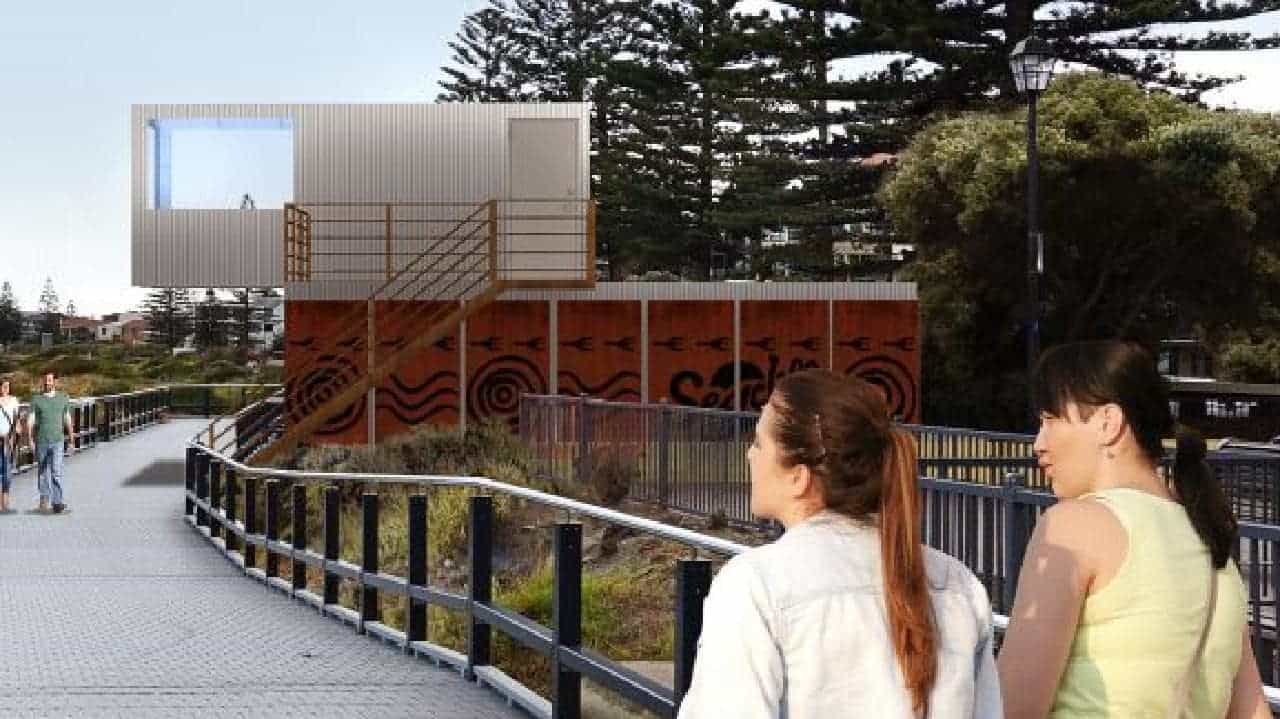 Seacliff Surf Life Saving Club in South Australia seems to have gone the opposite way. They too had deteriorating facilities that were showing their age but chose to have a permanent facility built of shipping containers at their site.

The new site uses two shipping containers, with one down below used as storage space but the top one is an enclosed watchtower. This is perhaps in recognition that as long as it is warm enough, surfers are wet in the water so don’t mind so much about rain or stormier weather as they are at the mercy of the sea anyway. As long as those in the water are sensible, those looking over them need not get wet and cold.

Also mentioned in planning was that the tower would have a 180 degree observation range so those outside the flags can be watched for as well as those within the designated surfing area. Lifeguards don’t take it lightly when someone is put in danger when they might be saved – while they do like to remind people to stay within the flags (somewhat irritatingly at times to the more determined) they must also keep an eye out for those without.

Local news reported that there was a fair old battle to get it pas planners, with some local aesthetes referring to the cargotecture construction as ‘dog ugly’. Beauty is in the eye of the beholder it seems and while those aesthetes fought for a prettier unit the council sided with the surf life saving club.

Fighting the planners was almost as much of a job as raising the money to make the thing happen but the club announced on its Facebook page that this money has been raised and locals, approving and otherwise, will see the shipping container surf tower go up in time for the next season’s surfing. 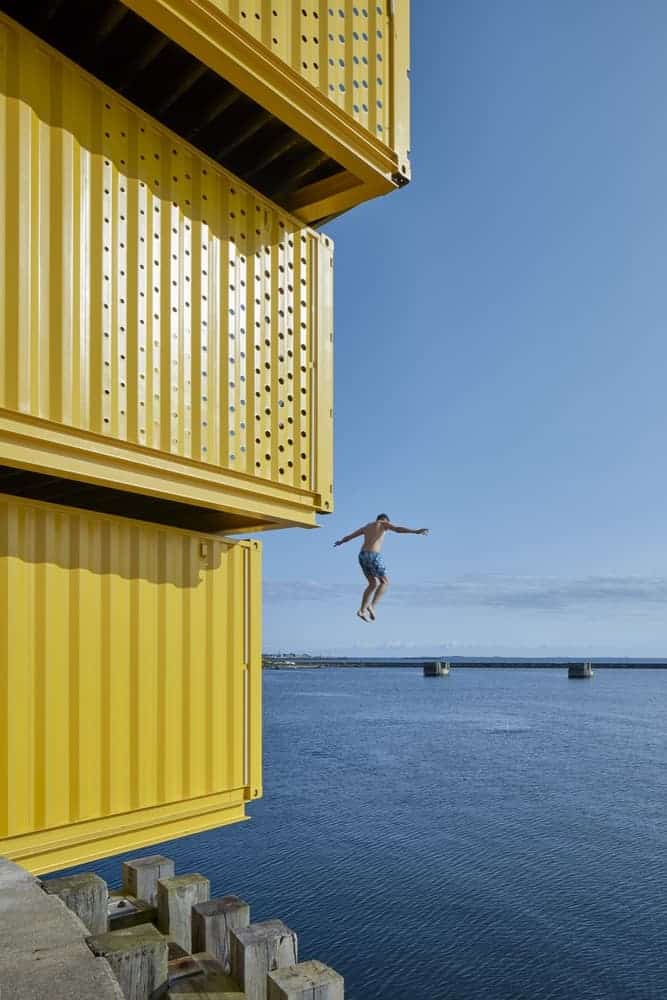 In April this year the Gateway Gazette reported on how the some locals in Denmark got together to build a controlled tombstoning platform for kids to leap into the sea during the summer months. We reported, “it seems that the locals of Halsskov on the island of Copenhagen in Denmark came to the conclusion that if you can’t stop kids from being lemmings then it makes sense to give the human lemmings a place to do it safely…

Used shipping containers can cost as little as a few thousand dollars. Swedish architects Sweco came up with the idea of stacking three on top of the old ferry pier, and having a fourth as a changing room. The lowest platform to jump from is four metres, which is still quite a height to the uninitiated. The next platform is eight metres and the top one is a dizzying 11 metres from the water.

There are ladders within to climb to the level you dare, and the platforms are lined with treated wood. Holes have been peppered through the stacked shipping containers to allow light in. Overall, a very cheap and simple project.”

Shipping containers are built to last

Researching this Gateway Gazette article it seems that there aren’t that many shipping container surf life saving club constructions around the world, despite the fact that millions of people surf in all sorts of places around the world.

This probably means that despite the counterculture attitude of surfers around the world, there are still relatively few shipping container based surf life saving clubs and constructions. The new Red Beach SLSC construction is undoubtedly stylish and aesthetically pleasing but cladding around shipping container constructions can allay the worries of those who just want pretty things on their beach.

Even the better used surf life saving clubs don’t like the idea of investing tens of thousands of dollars in a new construction, and when they do they will make that building last as many seasons they can. Once painted, sealed and treated shipping containers can last many years – arguably longer than cheaper structures that are built into the ground. Why? The sea thrashes buildings yet shipping containers in their original guise are built to be exposed to the worst conditions the sea can throw at them.

Your next shipping container project…?

We hope if you’re faced with needing a new more permanent unit to house a surf life saving club’s gear or even as a full club unit with watchtower you will consider a shipping container based unit. They’re a lot cheaper to put together, are very secure and most importantly will last decades – whatever the geology or climate will chuck at them! Contact Gateway to discuss your shipping container needs or get a free quote.