Stand Out Shipping Container Hotels in Australia and Beyond 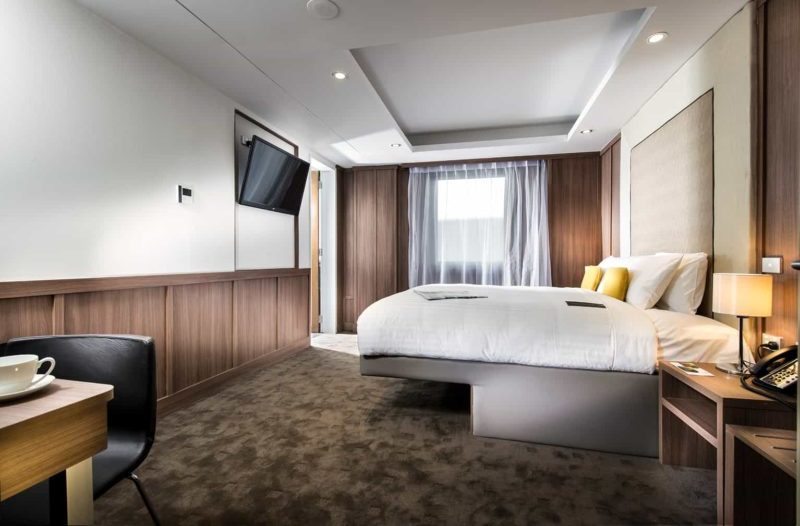 Here at the Gateway Gazette we love to show you the best that has been done with shipping containers. Today we’ll have a jaunt around the globe to see four of the most outstanding shipping container hotels in the world.

Let’s start here in Australia with the Hougoumont hotel in Fremantle, drop by Contained in Victoria and then go farther afield…

Considering we are effectively the biggest island on the planet and much of our commerce comes to us by shipping container, it is quite surprising that very few entrepreneurs have moved into ‘cargotecture’ hotels. If you’ve a bit of money floating about and a background in hospitality, contact us to discuss buying some containers to change that situation!

The Hougoumont in Fremantle, WA is a luxury, ‘small room hotel’ situated in the heart of the city. According to its website:

Looking around the hotel, it really shows just how far people can push cargotecture hotel design. The boutique hotel is the last word in luxury, which the company says, “is a melting pot for adventurous souls. Romantic escapees, pleasure seekers, corporate travellers, engineers, ship pilots, students and world wanderers. And they’re all here for the same reason – to experience what it’s like to be truly well travelled..”

Guests can access the gym or have a drink and a meal in its public areas, before retiring to one of the Hougoumont Hotel’s State Rooms or Cabin Rooms. The Cabin Rooms are still large at 15 square metres and feature an ensuite shower room and w/c (as with the State Room), a 32 inch TV and a range of other features designed to ensure everyone is comfortable such as a Nespresso coffee machine. Both types of room have free high speed WiFi.

The State Rooms (in the featured photo above) are more than double the size with 32 square metres of space, a 42 inch TV and a mini bar to help one sleep a little better at night. For security you have access to a personal safe in the room.

Tim Buckton, general manager talks about the hotel in the video below:

In a previous Gateway Gazette piece, we looked at the Contained hotel suites on Cockatoo Island which sits on the former penal colony island in Sydney Harbour. Now a place of escape and relaxation rather than confinement and punishment,for around $350 a night you can escape the hustle and bustle of city life for a stolen evening or two. 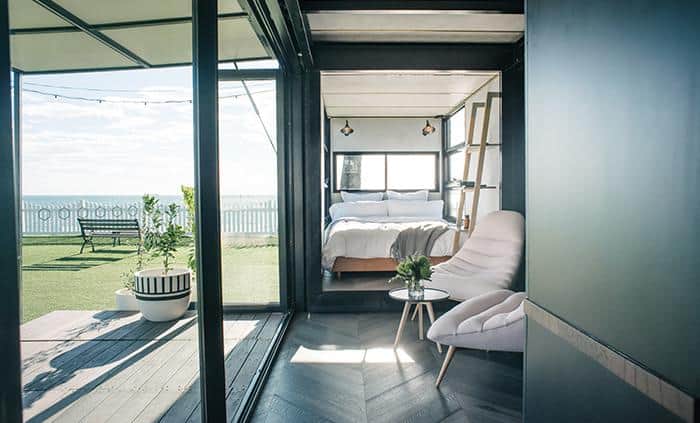 In our article we reported:

“Central to the entertainment complex is a two bedroom micro-hotel that is composed of two shipping containers, as well as plunge pools made of shipping containers for each room. Targeting adults who want a break from the hustle and bustle, each suite consists of a bedroom with a queen sized bed, sitting area and luxury bathroom.”

Contained itself is a company that is based in Victoria, and has a few sites across the continent where the guest can relax in glorious isolation if they choose, or wander off to a nearby restaurant.

Following the core ethos of cargotecture philosophy, the Contained shipping container hotel system allows for a temporary installation of a hospitality space almost anywhere you choose, for as long as you wish. You just need the footings and some sort (off grid or on grid) utilities supply. The Contained website explains:

“Contained can be transformed into anything and transported anywhere – rooftops, wineries, beachfronts and bushland. Imagine waking up at a retreat in a vineyard; working from your home office with stunning ocean views or drinking a fine glass of Pinot high above the hustle and bustle of city streets. Contained offers infinite potential…With Contained you can activate your under-utilized space, add value and generate income streams to your property, business or investment at reduced risk. We offer holistic solutions from planning and design to set up, activation and operation.”

This squarely puts the concept within all we enthuse about in shipping container repurposing – there are few limits to what you can do with them.

Take a tour of the eco retreat below:

Escape deep into hinterlands between empires

When people think of escaping from the world they often imagine a desert island in the South Pacific. It is possible to disappear deep inland, even father from civilisation than central Australia.

What about the Caucasus Mountains in Georgia? No, not Georgia on the East Coast of the US, but the country where Joseph Stalin was born in the human and geographical divide between empires and the continents of Asia and Europe?

The Quadrum shipping container ski & yoga resort sits in a politically and tectonic seismic zone where many may not even think of heading out there. Despite the spats between East and West over the strategically important region, Georgia is a peaceful and beautiful country with some of the best, unspoiled mountain biking and skiing to be had in the world. 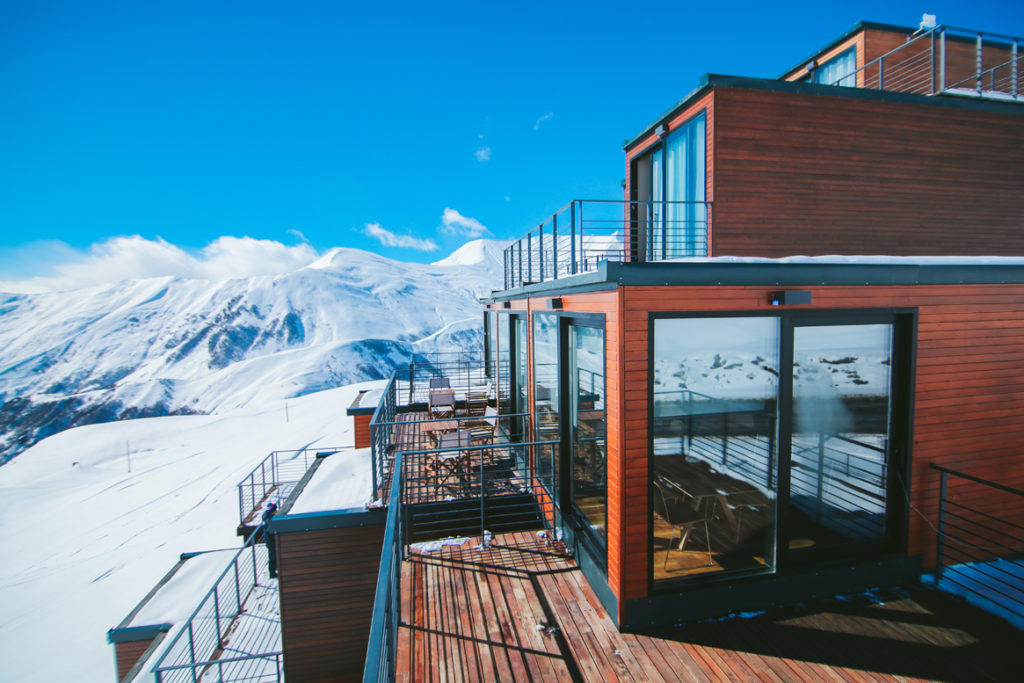 Skiing, you won’t be mobbed by wobbly snowboarders hellbent on personal injury, but will often find yourself the only person or people on the mountain. Mountain biking in summer? This is an experience quite unlike what you would find elsewhere in the world and if you’re an Instagram junkie you may find yourself the first in your peer group to have done it! 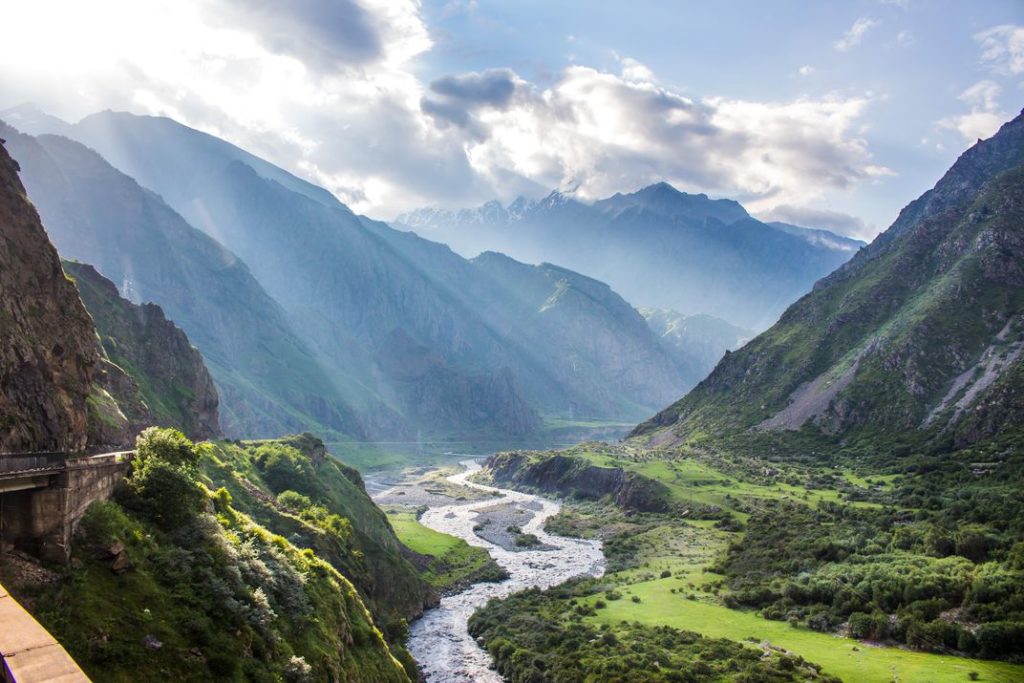 “Minimalistic in concept the hotel cascades down the natural landscape offering generous terrace space with stunning views of the Caucasus mountains.”

Built of shipping containers, the resort / hotel sits comfortably in the wilds of the mountainside, comfortably apart from the rest of the world.

And yes, we have looked at this special place before at the Gateway Gazette! In 2017 we reported:

“The Quadrum Resort is located 2200 metres above sea level near Gudari in Georgia. It is a luxurious boutique ski resort just a stone’s throw from a ski lift. The ski hotel is made of shipping containers, with the ground floor a large space including yoga rooms, a swimming pool and a dining and bar area for you to enjoy your ‘apres ski’ socialising and relaxation. Heading upstairs you will find that the rooms are made of one shipping container each, giving each guest ample space to chill out. This isn’t Soviet era brutalist construction either – each guest space is really well appointed with wood panels and comfortable furniture. If you really want to splash out on your trip then you can have a room with its own Jacuzzi that can pummel and warm your aching legs after a day exploring some of the best slopes in the world.”

As a 4th and final shipping container hotel, here’s one close to one of the best protected rainforests in the world – Costa Rica. Costa Rica is a Central American country renowned for its amazing wildlife and rainforest and is at one of the narrowest points between the Pacific and Atlantic – even to the point you can visit an uncompleted attempt at a canal between the two oceans before the Panama Canal was dug. 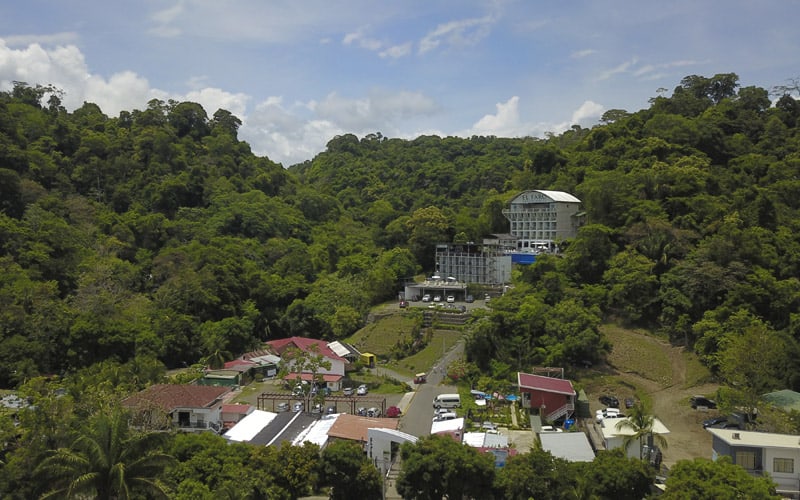 “Manuel Antonio’s El Faro Beach Hotel has become Costa Rica’s first and only exclusive hotel which is made entirely of reused shipping containers. These containers which were used in the construction began their journey in a faraway Port, destined for worldwide transportation on the 7 seas. Individually they found their way to the Costa Rican port of Limon, in the Caribbean Sea where they were ear marked for scrap after 15 years of service to the shipping industry. Seen as nothing more than a collection of unnecessary waste and garbage, with a little bit of vision and creation, these bent and buckled boxes were transformed into El Faro Beach Hotel.” 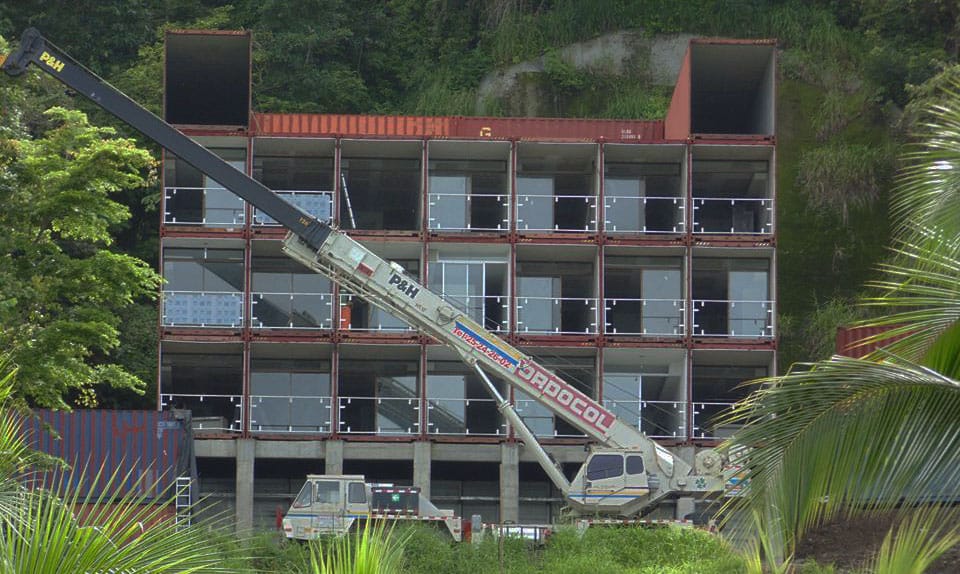 One of the strengths of cargotecture is the speed of build as well as the low carbon intensity involved in construction. The El Faro site again: “Compared to other hotel projects with a similar number of rooms, the entire construction time was actually 35% faster and was brought to a completion after managing to save upwards of 80% in the amount of concrete and water which would have otherwise been used. This in addition to producing only a fraction of typical construction waste has resulted in what may be one of the most famous eco-friendly hotels in all of Costa Rica.”

Gateway for your shipping container needs