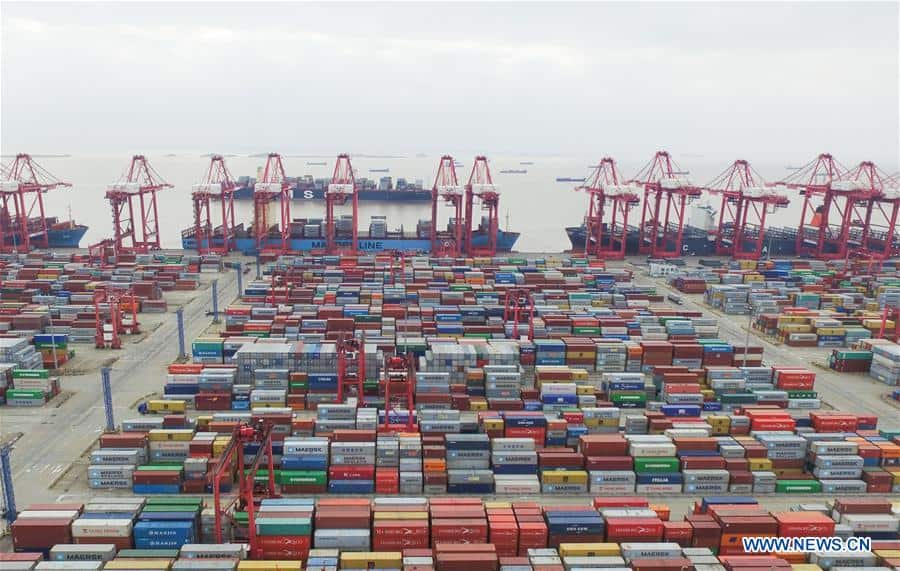 Shipping container logistics is about driving efficiencies into the supply chain. A lot of those inefficiencies being driven out are humans. The Shanghai Yangshan Deep-Water Port has been billed as the ‘word’s first unmanned container port’, which isn’t exactly true – to unload and reload a containership it requires nine men in an office, not 60 dockworkers on the ground. That’s pretty efficient!

Containers killed off the ancient trade of the dockworker decades ago. Unloading and re-loading a tramp ship used to take hundreds of workers several days as they shifted pallets of goods from the bowels of the ship. This cost money in unloading and reloading and the costs were passed on to the consumer.

Containerisation has enabled cranes to load and unload the ship very quickly with just two settings – one for the single Twenty foot Equivalent Unit (TEU) and another for the 40ft, 2 TEU container.

Technology has roared ahead with the advance of computers. Only a couple of years ago Rotterdam got rid of truck drivers by having robot trucks stand under the ship unloading cranes and then move the boxes elsewhere in the port. Robots were already stacking them in the port yards. Human jobs quietly disappeared.

This has enabled costs to be driven out of the supply chain to the point it is now cheaper to make goods in China and import them from half way around the world, than it is to make them in the country where they are sold. Containerisation has enabled China to go from being a Third World country to being one of the richest in the world.

Thanks to ships moving up and down in the tide, and in different directions due to currents and winds, the ship to shore crane has been one of the last bastions of humanity on the dock. You needed eyeballs and a human brain to precisely drop the crane onto the box, lift it and move it to the shore. It seems that the Yangshan Deep-Water Port in Shanghai has worked out how to get rid of these highly skilled, highly paid operators too.

The Yangshan Deep-Water Port has reduced its workforce costs by a whopping 70% as the workforce has changed from being a predominantly blue collar one to one of a white collar, small team based in an office.

A reporter from the China Global Television Network (CGTN) visited the port one night to see all operations taking place in total darkness. They observed, “Machines and trucks were busy moving on their own in the darkness, as containers were being unloaded 24/7 from a giant cargo ship.”

“It’s all controlled by artificial intelligence,” said Yang Jiemin to CGTN, who is in charge of technological support. “Through laser scanning and positioning, the program is able to locate the four corners of each container. It then accurately grabs them and puts them onto the driverless trucks.”

Now for the rest of logistics?

Driverless trucks will be on the road within five years. Trains are more or less totally automated. Fewer and fewer people drive the giant container ships, and ports are becoming entirely operated by robots. It seems that the simple idea of a standard-sized box being stacked on a ship in the 1950’s has helped make the supply chain almost devoid of people and changed the world out of recognition.