Zubabox – A Shipping Container Connecting Refugees to the World

Here at the Gateway Gazette we look at a lot of Western uses for reused shipping containers, yet by virtue of their solidity and security shipping containers can be used in quite hostile and disconnected environments. An international development charity called Computer Aid understood these attributes in 2010 when it developed its first Zubabox, a solar powered shipping container internet café that helps connect the dispossessed around the world back to the 21st Century.

Given the civil wars in the Middle East and Africa taking place at present, we are in an era where many millions are living in desperate poverty to escape the bullets and bombs at home. Connecting them to the internet is a simple yet effective means of both helping them reconnect to their families and social groups, but also giving people economic opportunities. In this blog we will look at how this has worked in the real world, and how shipping containers can offer a lifeline even when Western countries close their doors to those in most need.

In 2010 Computer Aid delivered its first Zubabox shipping container internet café to the Kakuma refugee camp in North-Western Kenya. Kakuma in Swahili means ‘nowhere’ and this is very much the case, with more than 180,000 people living there escaping war and famine from a number of countries across the region including Congo and Somalia.

Costing around US$101,000 each to install, deliver to site, and operate, these 40ft shipping container systems aren’t cheap initially. The Zubabox uses refurbished PCs and a number of workstations for those using them to connect back to the world. They are solar powered, and are connected to the internet via the local mobile data network. While someone couldn’t play streaming video games on it, it has the immediate impact of giving people connection back to the real world.

Since the first Zubabox was successfully set up and run in Kakuma in Kenya, Computer Aid has set up new shipping container internet cafes in Ghana, Zimbabwe, Nigeria, Togo, Zambia, with the latest café being set up for the internally displaced in Bogota, Colombia. Computer Aid are now looking to put a second Zubabox in Kakuma to extend its reach across the ever growing refugee camp.

How it is used

Kakuma was where the first real success stories emerged from the Zubabox programme. Computer Aid organised university education programmes with US universities so those using the café could further themselves even while far from their homes. Muzabel Welongo had been living in Kakuma for five years after escaping the brutal civil war in his home country, the Democratic Republic of Congo. Welongo enrolled in the university courses and was awarded a Liberal Arts Degree for his work.

Welongo used his education to benefit his community. He set up an organisation called SAVIC that teaches people literacy, vocational skills and family planning. In teaching people these skills they can turn their lives around, even while in ‘nowhere’. 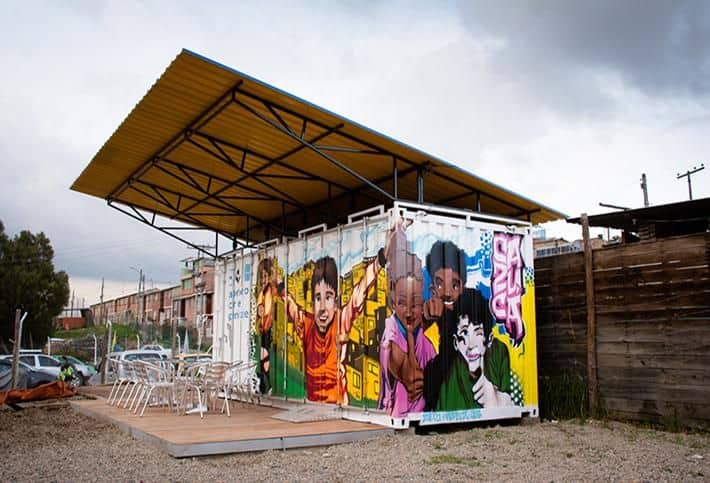 In Cazucá, Bogota, a suburb of Colombia’s capital where people escaping the civil war live, the Zubabox has really energised local young people. Speaking to the Huffington Post William Jimenez said of the project, “The fact that someone has finally considered Cazucá a priority is not only an important technology and training [advancement], but also because of the optimism it inspires in the entire community.”

Potential for Zubabox beyond current reach?

These days one doesn’t need to watch the TV news or read the newspapers for very long to appreciate that millions of people around the world are escaping war and famine. After being implicated in the Syrian conflict, Europe has closed its doors to the refugees who have escaped the war there, while governments around the world have sold arms to the countries bombing Yemen into the Dark Ages. There are civil wars ongoing in Africa that rarely make the papers today as the media gaze looks elsewhere. Somalia is still a failed state despite being the focus of the world’s gaze for many years.

If Computer Aid built 1000 more Zubaboxes this year they wouldn’t be put in every refugee camp around the world and those in use would be massively oversubscribed. For other people who may be thinking of doing something similar, the concept is simple and elegant and could help millions more people get their lives back on track again, whether connecting with their lost communities or getting economically active again.