A Novel Way of Hiding a Shipping Container 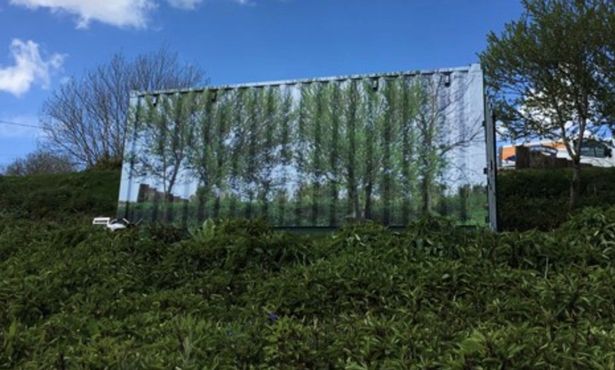 A businessman has been given an award for the way he hid his shipping container storage unit in plain sight.

No matter the wonders of shipping containers – they don’t fit just anywhere… They can sit very well in a post-industrial landscape full of old warehouses and port machinery. The quasi brutalist nature of the form is very acceptable in certain parts of cities.

Plymouth is the biggest port in Devon, England and, no matter its industrial core, the famed military port where Francis Drake played bowls before tackling the Spanish Armada is still sat in one of the most beautiful parts of the UK.

There are parts of Plymouth where a container would sit well – the trendy Barbican fishing port, or even the huge Royal Navy base where nuclear submarines are replenished. They might even sit well inside the Army base at the Citadel there – Matelows, Bootnecks and artillerymen tend to use quite ugly equipment…

An unnamed businessman had a shipping container as a storage unit for his business’s tools and equipment. It was stored at the top of a ridge in the countryside close to Plymouth. The neighbours objected…

Planning laws in the UK permit a shipping container to be used as a storage space almost anywhere within reason. No matter the views of the council – you have to stay on the right side of your neighbours. How to camouflage it then? Ask the soldiers down the road…? 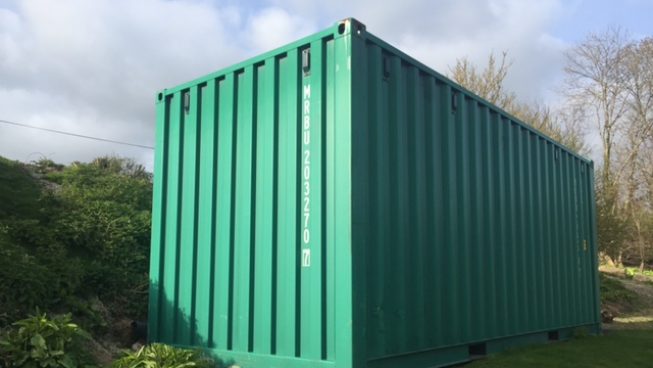 How about printing a photograph of the local surrounding scenery on it?

The businessman approached local printers Graphicomm for help. They visited the site and looked at what they could do.

According to the Plymouth Herald newspaper, ““We came up with ideas and decided the best solution was to try and blend it in with the surrounding area.” Company designer, Sophie Sharpe used photos of the area to cover the container. Both John and Paul were helped by employee, Chris Vickery in fitting the vinyl.”

They used a special weatherproof vinyl made by international plastics company Antalis to print the photograph on. It so happened that the French company was running an interior design award for the first time in 2018.

The container was nominated, and then shortlisted.

The Antalis jury said, “We really like this idea and realization. Containers no longer disturbing the view on landscapes is an idea to make our environment less dominated by industrial areas. Excellent concept and execution. Nicely hidden!” 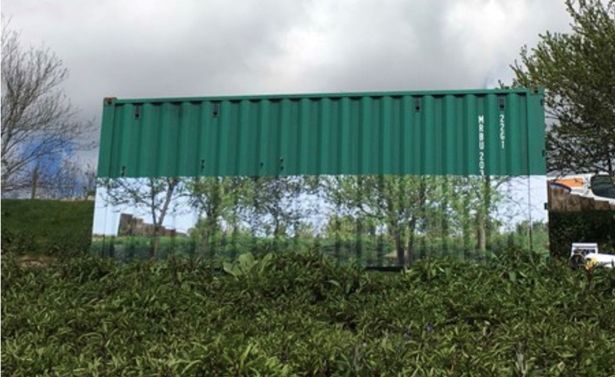 Would you do similar?

If it brought your neighbours back aboard and kept the planning inspectors at bay wouldn’t you spend a few thousand dollars cladding out your shipping container? It seems a rational and even sensible approach to making things cool with people who could otherwise make life unnecessarily stressful.