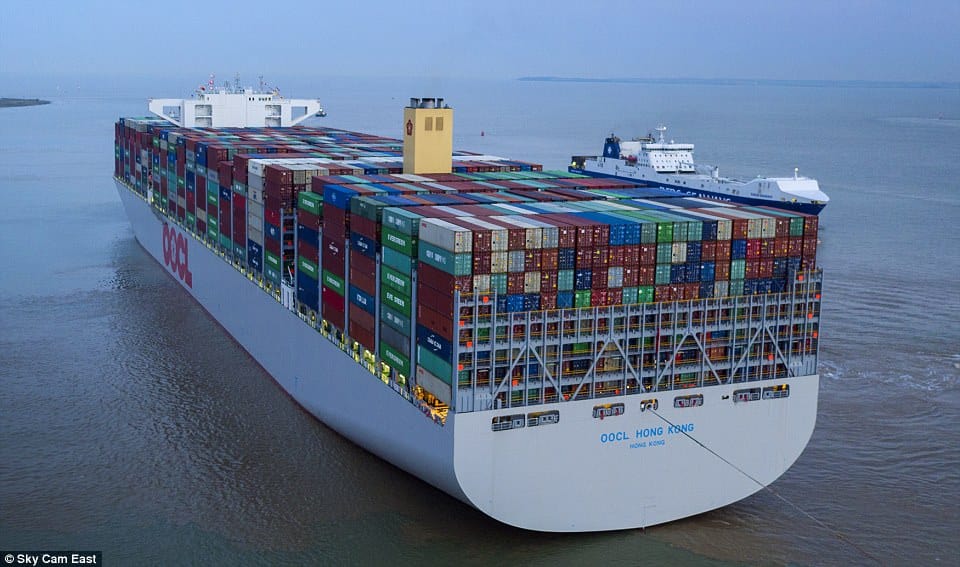 Since the first container ship set sail from Port Newark, New Jersey to the Port of Houston, Texas with 58 containers on board, container ships have grown to giant proportions. Today the largest container ship in the world is 399 metres in length (not far short of the largest ship ever built) and can carry a whopping 21,413 Twenty Foot Equivalent Units (TEUs), or roughly 10,706 40ft long containers. This blog will look at what the largest current ships are, how they have changed the ports they serve and what has driven the growth.

The OOCL Hong Kong is at the time of writing the largest container ship afloat. This Ultra Large Container Vessel (ULCV) is 399 metres long, and can carry 21,413 TEUs of containers.

The OOCL Hong Kong is the first ship in the world to be built that has a capacity of more than 21,000 TEU. She was built and delivered in May 2017, but only a month earlier the biggest ship in the world was delivered to Maersk Line – the Madrid Maersk has a capacity of 20,568 TEUs. This vessel was in her brief time only the second ship to surpass the 20,000 capacity mark, yet a month later lost her crown as the biggest container ship afloat.

From this section you can see a bit of an arms race going on between shipping lines to build ever larger vessels, even in a market so competitive that a major shipping line went bust in 2016. Why? 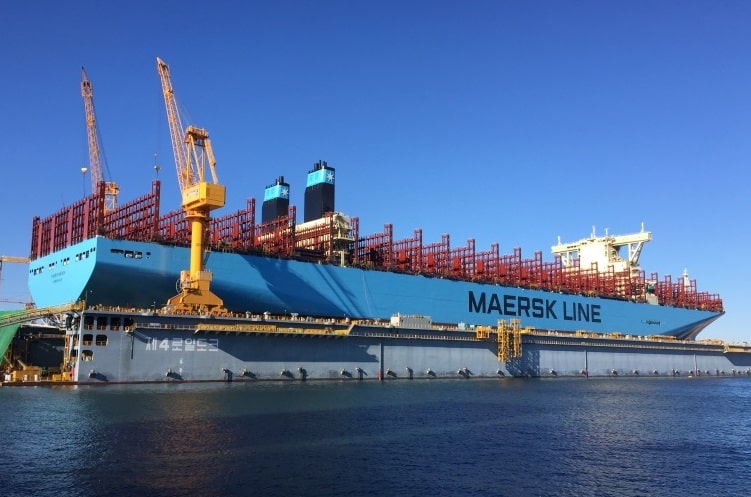 A 10,000 TEU VLCV will burn around 300 tonnes of fuel per day at 25 knots. A 5,000 TEU feeder container ship will burn about half that. However, you will need roughly the same number of crew to move one 5000 TEU ship around the world as you would need to shift the VLCV. The cost efficiencies can be seen in that, and further down the supply chain.

In another Gateway Gazette blog we looked at how container ports are employing fewer and fewer people even as ships are getting bigger and bigger. Ultimately you just need a bigger gantry crane to reach further out across the ship, a deeper channel for the ship, and a stronger quayside to withstand the weight of the larger ship pulling and pushing on it in the winds and tides – the costs aren’t hugely different between the smaller port and the larger one.

Port and canal size is, however, the chief limit as to the size of ship that can ply the world’s oceans. It is estimated that the ULCVs mentioned above can only go into around 20 ports around the world because of the engineering and space required to build such ports. These ships just aren’t built to go through the Panama Canal even after it was expanded and re-opened in 2015.

The OOCL Hong Kong travels between China and Europe, while other ships of its size will do a run between China and the North American West Coast. Those needing to go from China to the US East Coast were limited to 5100 TEU until 2015 – these were known as ‘Panamax’ ships because they were built to within the limits of the canal. The New Panamax ships now have a capacity of up to 13,000 TEUs, which only 10 years ago was the size of the largest container ships afloat.

You still have relatively tiny container ships that go to the smallest container ports that have a capacity of around 2000 – 5000 TEUs. These are known as ‘feeder ships’, as they can reach smaller ports and will generally do relatively shorter journeys. This isn’t unlike you taking a Boeing 747 from London to Sydney and then a smaller Boeing 737 on to an airport closer to your home. 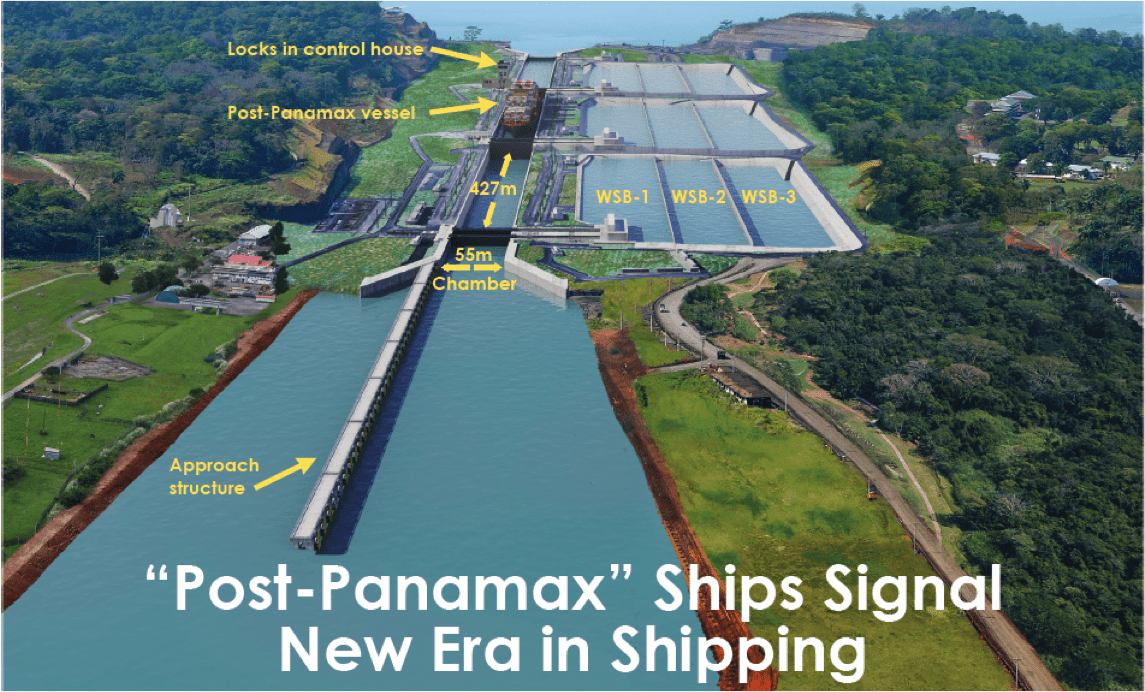 Until the Panama Canal expansion the main trade route from East Asia would be by ULCV to the US West Coast ports (LA and Long Beach for example) and then either by train and road to customers in the US and Canada or via feeder ship to a more local port.

When the Panama Canal Authority announced the dimension sizes of the New Panamax ships, US East Coast ports saw a major opportunity. Since most trade in the world originates from East Asia and heads to the US and Europe, they found that larger ships were more likely to visit. Up until then they could only take feeder ships that would take containers from the West Coast ports through the Panama Canal and up to the US East Coast. Larger ships could now go to the East Coast and they could expand.

Feeder ships have an advantage over their giant cousins. They can enter smaller ports and take the goods more cheaply far closer to the end customer. Railways have a lower capacity and charge more per tonne mile than ships and with the main objective of moving goods by sea to reduce the cost per tonne mile of cargo, it is often more economical to take a route that involved a ULCV for the big leg of the journey and then switch to a smaller ship to take it to within a short land journey of the customer. The US being more than 2000 miles wide, it may make sense in terms of cost to have a container shipped direct from China to Florida than to send it by train to a customer from Long Beach. 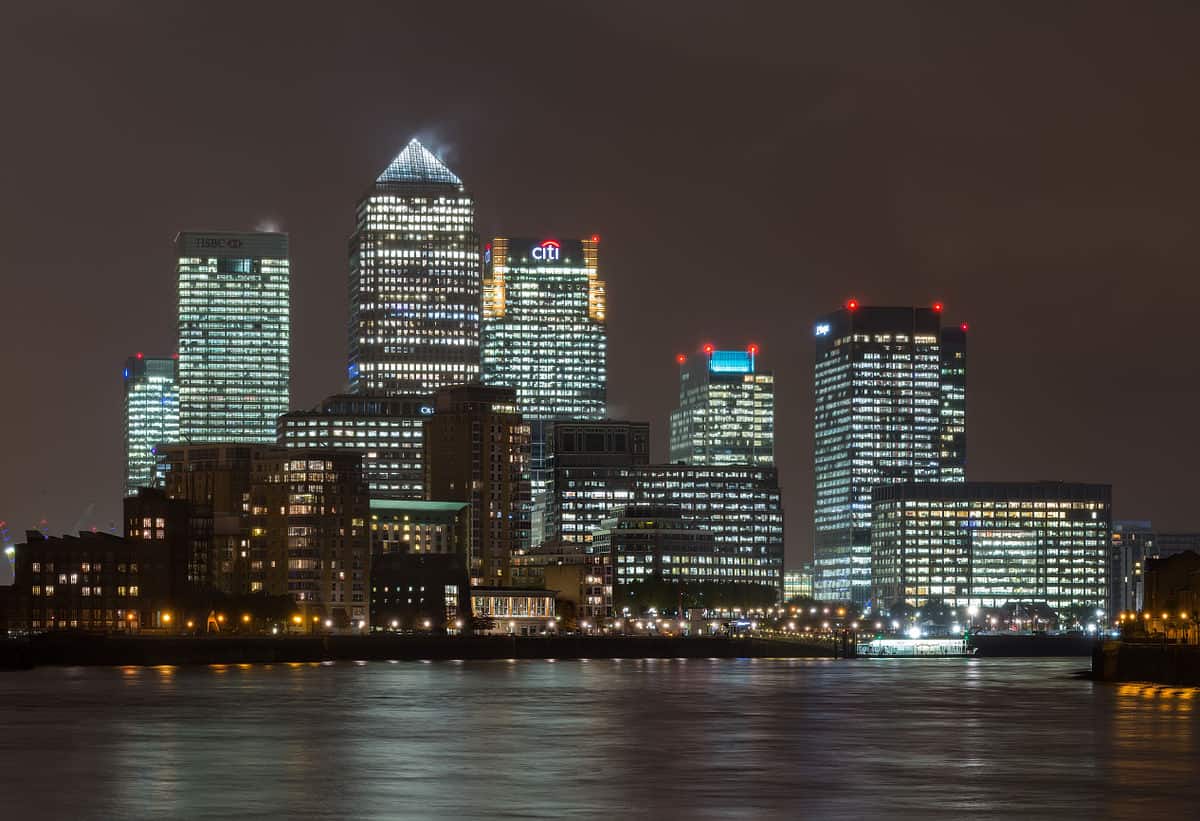 There are a number of factors limiting port size. You need deep water for the largest ships, a quayside that is long enough and strong enough for the ships that you hope to come in, big gantry cranes to lift and shift the containers, good transport links, and a large area for shipping container storage. While many of the world’s cities were founded on major rivers where ships could get right into their centres, the ports have moved to those cities’ fringes so they can meet the capacity of the newest ships in question.

If the port is in a city then it is unlikely to expand much as real estate for housing and offices will be too high for a busy port to expand into. A classic example of this is London in England, where the docks used to be just a mile or so from the very centre of the city. Ships grew too big to sail up the Thames and now after a period of decline in the 1970’s, Canary Wharf and Rotherhithe are now some of the most expensive housing and office developments in the world. The Port of London has moved several miles down the river where land costs are relatively low and it can take ULCVs. Goods can rapidly get onto the motorway network and access the distribution centres around the UK.

Those ports that could not grow have either moved or now take feeder ships, in much the same way as the US East Coast ports used to take before the expansion of the Panama Canal. This is one of the reasons that there will always be smaller feeder ships doing the last sea leg of a journey from Asia to the end customer.

When will these ships stop getting bigger?

There is one thing to note though – while the giant 500,000 DWT ULCC crude carriers never really caught on due to limitations of port size, no one is saying that we have reached ‘peak container port size’ even now that container ships are reaching similar sizes to those of their crude carrying cousins. This seems to be because the economies of scale found in the cost of goods being moved around the world by ULCV are being snapped up, and the hub ports are meeting the demands of shipping companies. As designs get ever bigger, so the ports design and build ever larger terminals.

Economies of scale however have one drawback – profit margins per tonne are getting ever smaller. This is arguably one of the reasons that the South Korean shipping company Hanjin went bust in 2016. While other factors are at play, such as the amount of excess capacity in the global fleet (there are too many ships), the markets are driving margins down, and for shipping companies the answer seems to be ‘go big or go home’. Since your writer did his shipping degree in the 1990’s, ship capacities have increased from 1000 TEUs per ship to 21,000 TEUs today. Will we see 42,000 TEU, 1km long ships by the time I reach retirement age? Nothing is slowing down the growth in size today so it isn’t inconceivable!

With more and more shipping containers plying the world’s oceans on these monster ships, so the popularity of shipping container architecture grown in leaps and bounds. If you’re thinking of taking the leap into building a new container construction, get in touch with Gateway Container Sales now! We offer free quotes and advice as to how to go about your new project.

How to Build a Shipping Container Swimming Pool
September 27, 2021