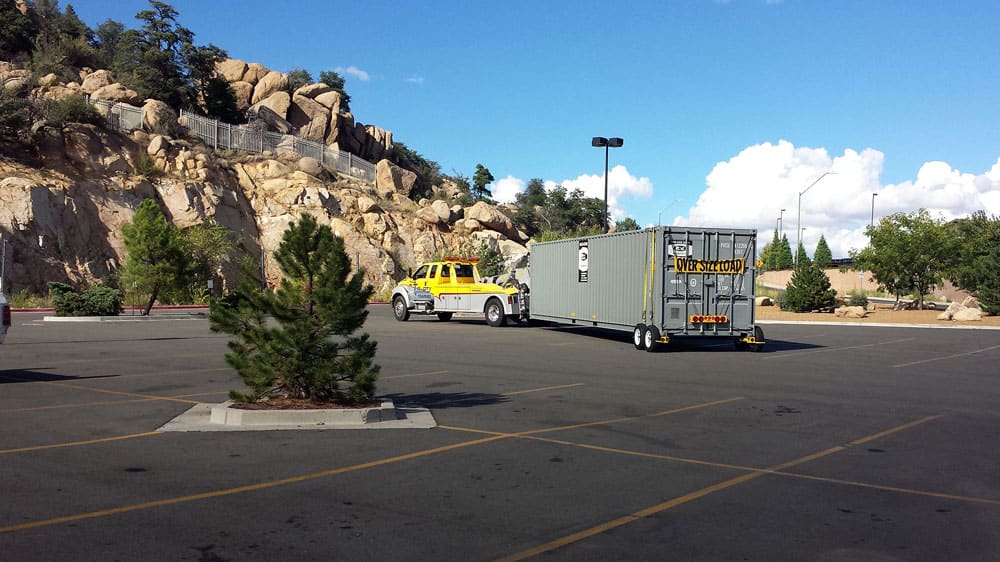 One of the drawbacks of shipping containers is that while they are portable, up to now they have required heavy lifting equipment and large trucks to move them any greater distance than around your backyard. Containers are lauded for their portability but you generally need quite a bit of kit to do it!

There are two drawbacks to container transport systems that have existed up to now. Firstly is the cost of hiring a large flatbed truck and driver. The next issue is that to get that large truck onto site you need a good 100 feet of space in addition to the 20-40ft of space required to store the container in the space you’ve allotted. This space requirement often limits the space you can put the container without bringing in another specialist with a forklift system at additional cost.

Two entrepreneurs in the United States saw a solution to this problem and developed the Cheetah Lift system that enables someone to move their container around on public roads without having to hire a flatbed truck at $$$ an hour. Most importantly, you don’t need vast amounts of space for a large truck to get the container in position.

Let’s look at what they are up against on the market before looking at the Cheetah Lift system in some detail.

Please note that this blog is just highlighting the different lift and towing systems for shipping containers, Gateway does not stock any of these. 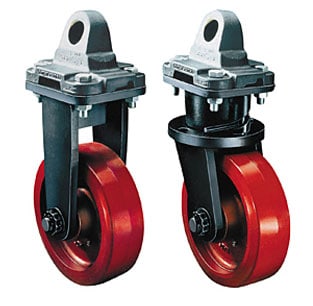 For moving shipping containers around your warehouse or yard (as long as it is quite flat and well maintained – not a muddy yard in short) there are a couple of companies that have developed castors and skates for shifting containers relatively short distances.

For around $80 plus shipping, you can buy a set of four castors so you can manually push the container around your space. One of the difficulties with this system is that you still have to get dedicated lifting equipment to get the container on the castors.

The UK based GGR Group has developed a shipping container moving system, aptly named the Container Mover. This has the advantage over the castors / skate system where two people can relatively easily put the wheels onto a container with a fully loaded weight of up to 17 tonnes.

It can also be attached to a van or four wheel drive car to be towed around your yard. While this is definitely a step above the castor system, there is one major drawback – it can only be safely driven at up to 7.5mph. The absolute minimum top speed you need to drive on a national road network would be 40mph, and even then you can get in trouble for going so slowly!

Using a system of hydraulics, jacks and balancing, the Cheetah Lift container towing system is designed so two people can put a shipping container onto a road legal dolly and towing system, and then tow the container on a national road network. While maximum speeds haven’t been discussed on their website, we presume that you won’t always be leading a huge queue of irritated drivers as you crawl about the town and country!

Arizona based Chris Christiansen, a former truck driver, came up with the idea a few years ago and immediately called his friend Gary Gates who is a fabricator by trade. Between them they developed the hydraulic lifting system and dolly that makes it so easy to get the shipping container on the road and then into a relatively tight space.

While the system isn’t cheap and is likely to be picked up by specialist towing companies at first, it does get round the issue of space. A four metre tow truck requires significantly less space than a 10 metre + flatbed lorry. This means that the shipping container can be transported between locations with relative ease and then put into a tight space without perhaps needing a forklift truck to finish the job of positioning the container.

Though this is the first such container transport system of its kind, the design has yet to be patented. The two entrepreneurs plan to sell the patent once it has been awarded, meaning that they can move onto other projects. As a concept it really is one of those things that many a person will scratch their head and say, ‘why didn’t I come up with that idea?’ as it is a fairly obvious solution to a long held problem!

As mentioned we don’t stock any lift and towing systems for shipping containers, but we have a door-to-door container freight service throughout Australia. Gateway Container Sales also provides a range of container storage and transport solutions to meet your needs. Get in touch with our team today to discuss your needs – we look forward to hearing from you.