On the 17 June 2013, the five year old container ship MOL Comfort started to break up off Mumbai, India. It was gradual, with steel plates buckling and letting water into the hold, before the cracks in the hull eventually lead to it snapping in half after the ship caught fire. Luckily the crew were able to escape and while being towed by a salvage tug the container ship took in too much water and sank. Watch a Vietnamese news report of her sinking below.

It is likely that she sank because she was improperly loaded. This blog will discuss how giving the wrong weights of your container to a shipping company could ultimately sink the ship it is on.

Over the following months the Japanese maritime authorities ran an investigation. According to the Royal Institution of Naval Architects, “The investigation quickly excluded out grounding and/or collision, fire and/or explosion originating inside the ship and brittle fracture originating from the upper deck. The Committee’s investigation concentrated on two potential causes of the accident:

An expert in shipping wrote a blog shortly after the MOL Comfort sank. He explained, “mates and stevedores had to consider the ship’s longitudinal strength alongside the ship’s stability. Now, just as they have had to be very careful in the cargo’s center of gravity for stability, they also have to take care that they do not load too much weight in the ends of the ship, particularly on deck, so that the bending stresses will remain with within allowable limits.”

Where these excess weights cause the hull to bend, this can cause real problems. When you want to break a piece of metal between your fingers, you bend it up and down until it snaps. This uses a phenomenon known as ‘metal fatigue’. Bad loading to ships can cause the same issues and is widely held as the reason that the MOL Comfort sank.

Another aspect of distributing loads is that the officers of the ship and stevedores at the port need to load the heaviest containers near the bottom of the ship. If they are too high in the stack, the centre of gravity could be very high and could ultimately lead to the ship capsizing in big seas.

Keeping loads evenly distributed, both to stop the ship toppling over and to prevent it from snapping in two, takes a lot of clever calculations and even with the correct weights people get this wrong. This is likely what happened with the MOL Comfort, though there is another problem – exporters lying about the weight of their containers. 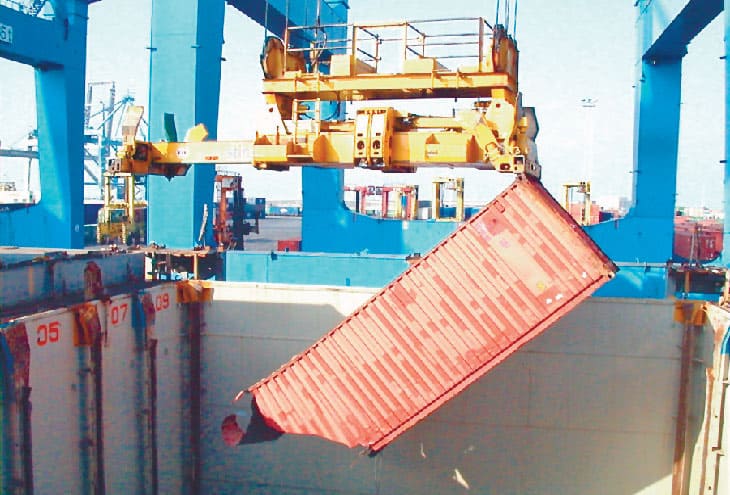 One of the details about your container you need to provide when you ship it off abroad is the weight. This will inform the stevedores and officers of the ship where to load it, so that they can load the ship evenly. Until recently it has been left to the exporter to estimate this. Since it is cheaper to send a lighter container, many are grossly underestimated to save money but authorities have caught on lately.

New Zealand authorities will now demand that the weight given to the port is the same as it when weighed – the verified weight. Stuff.co.nz reported in June, “From July, New Zealand international shippers must verify the weight of export containers before loading. Ports started asking for verified container weights on June 15 ahead of the compulsory regime starting July 1.”

Stuff.co.nz also reported how, “Canterbury transport company owner Geoff Evans, said sometimes his staff had been unable to lift a container with a swing lift designed for 36 tonnes. Usually they would expect a container like that to weigh about 30 tonnes.”

As can be seen above, shipping companies really need to know about weights so they can accurately calculate where the container needs to go as ultimately it could cost the vessel, the lives of the crew and billions of dollars of losses of goods as they go down with the ship.

Keep your goods safe with a second hand shipping container

If this article caught your interest, be sure to visit our Gateway Gazette, there’s plenty more where that came from. At Gateway Container Sales we have hundreds of 10ft, 20ft & 40ft shipping containers in stock for sale and hire, as well as an onsite workshop If you want any modifications. Whether you’re after a pre-owned shipping container for storage, transport or architectural use, our friendly team can help you with your needs. Give us a call today and we can help you develop your shipping container ideas into reality.