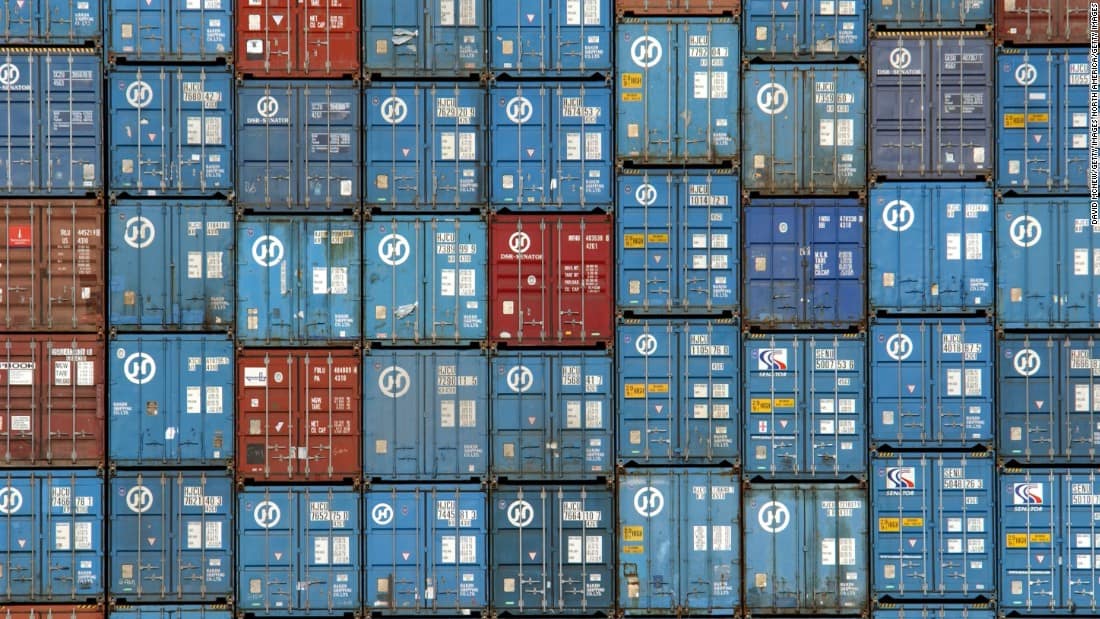 The sea is a draw to many an artist, both visual and those of the written word. One only needs to imagine the infinite emptiness of unchanging horizons for days on end as a vessel crosses the Pacific from China, to the US, or the mood changes from placid calm, to brutal rage as the container ship crosses the path of a nasty weather system. Famous French philosopher Michel Foucault once said, “The boat is a floating piece of space, a place without a place, that exists by itself, that is closed in on itself and at the same time is given over to the infinity of the sea… (it is a) great instrument of economic development, but has been simultaneously the greatest reserve of the imagination…”

In recent times a number of artists have taken up residencies on container ships as they ply the oceans, carrying 80% of global trade from manufacturer to retailer. Here we will consider three of their experiences, reflecting on the romance of travelling the world by sea. 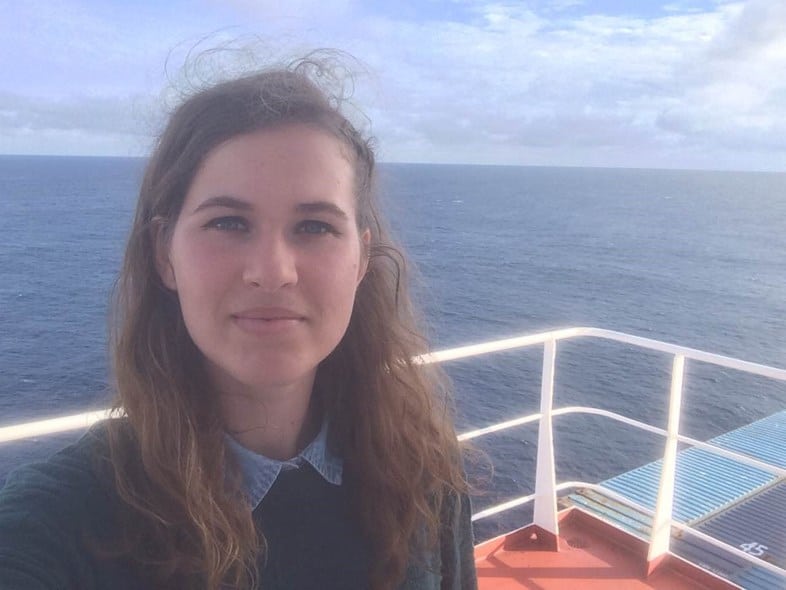 British abstract film maker Rebecca Moss was the resident artist aboard the Hanjin Geneva, crossing the Pacific last year when the shipping line went bust and it was refused entry to its next port. Her journey from Vancouver to Shanghai was supposed to take 23 days but due to the unexpected events, she ended up aboard ship for 25 days when the shipping line filed for bankruptcy protection a week into her journey. She was one of hundreds of people stuck around the world when Hanjin went under, but for Moss, this was a beautiful experience that money could never buy.

Speaking to CNN, Vancouver gallery director Kimberly Phillips said of Moss’s experience, “It actually underscores perfectly the aims of the residency in the first place. A consideration of time and duration, unpinned from the cadence of everyday life, as well as an attempt to make visible a global system of seaborne freight that most of us remain blissfully unaware of.”

Most sailors don’t get to communicate their experiences, even when put in peril by their ship owners’ woes or the anger of the sea. For Moss, an abstract video artist therefore, this was a rare opportunity to communicate the peculiarity of her experience. Her work is described by the Vancouver Access Gallery (that sent her on the trip) as staging “interventions, stunts, experiments, and games within the landscape to create slapstick scenarios that the artist feels to have emotional and political potential. The work, which is usually experienced through short films of documented actions, is concerned with the politics of anti-monumental gestures.”

One can imagine that she was particularly inspired by the shock and worry aboard ship when the shipping company went into bankruptcy protection. It will be interesting to see what this particular London based artist produces from her experiences. 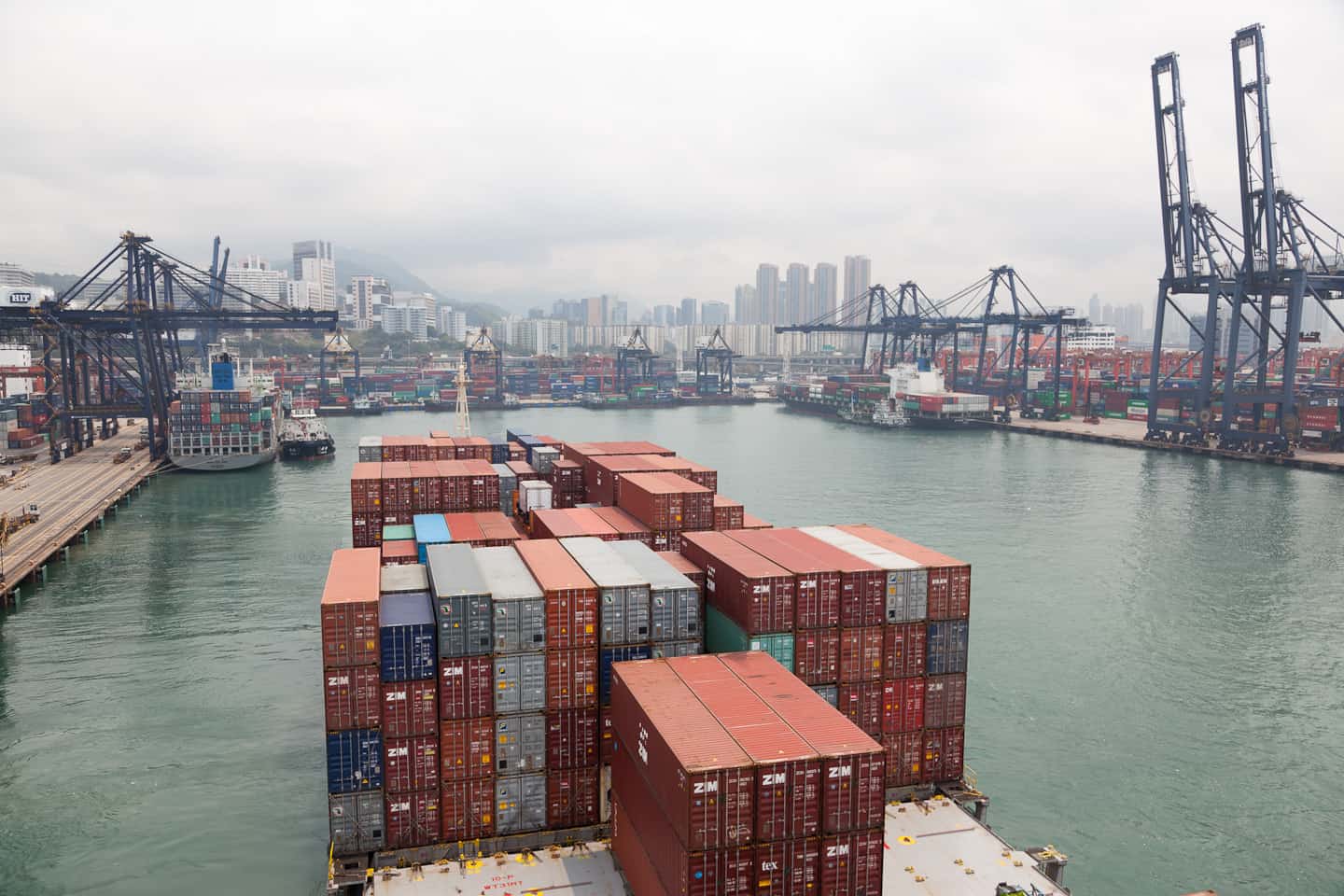 Revital Cohen and Tuur van Balen did a residency on a similar route to that of Moss above. They introduced their experience to the US arts magazine Art in America by stating, “We spent the beginning of the summer at sea, along with nineteen men and four thousand shipping containers packed with electronic, car, and animal parts, all heading to Nigeria.”

The artists had been working in China and Africa, focusing on parts of the supply chain that many people seem to forget about as they handle their iPhones and gadgets. For the artists this would be a great opportunity to see the link between the source of the raw materials and the factories turning them into trinkets and gadgets for consumers in the West.

They found the experience to be perfect: “The opportunity to work within the global industrial supply chain provided us with the best studio we could imagine. We spent our days reading on the bridge, filming from the deck, and drawing in the officers’ recreation room. There was no internet or phone connection on the ship-just the sea, the crew, and the locked containers full of mysterious objects. It was perfect.”

While for the artists aboard ship the experience was something they would never find anywhere else as a form of extreme novelty, for the sailors and officers aboard there was a certain sense of foreboding as they closed on the African coast. Not all piracy hotspots around the world are heavily reported on or protected by fleets of Western navy warships. This left the crew on edge for several days as they came close to the destination port.

The artists became fascinated by the routines that the crew had daily. Once a ship has been painted from end to end, it needs to be painted from the other end again due to the hostile nature of the sea to the ships that ply upon it. Cohen and Van Balen said, “We became fascinated by the choreography of maintenance on board as the crew continuously painted the deck in a never-ending battle with entropy. The routine felt like a continuation to 75 Watt [2013], a film we made in China where we choreographed labourers’ movements. Our observations of the ship’s maintenance routines fuelled our interest in production through industrial movement, which is monotonous, optimised, and standardised, and our research into early time and motion studies that measure efficiency, and current practices on assembly lines and open mines.”

The two artists would go on to display their art at the Empty Gallery in Aberdeen, Hong Kong. One of the most important elements of their work is a video that you can see in the video via this link. 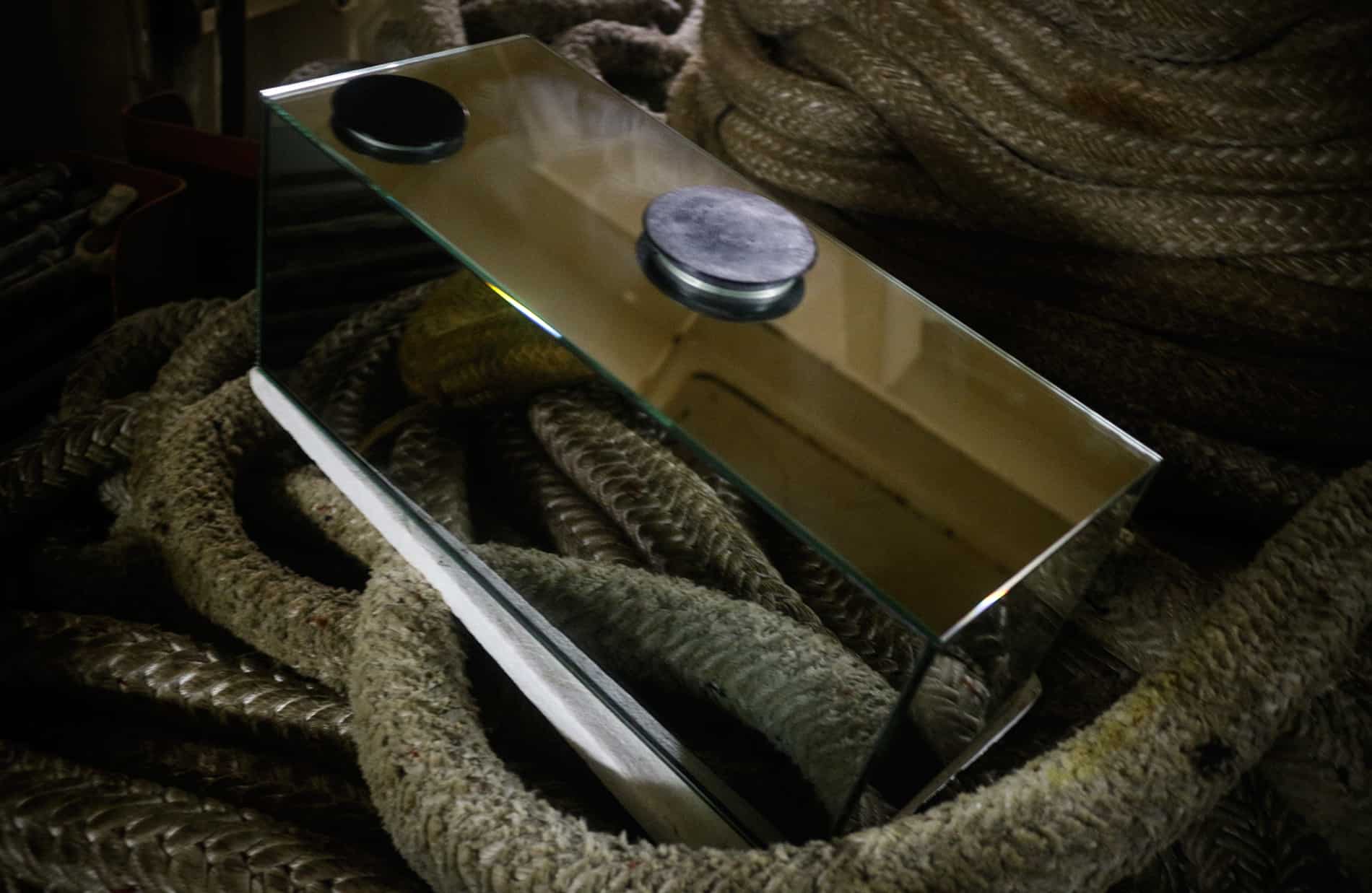 Mari Batashevski is a Switzerland based photographic artist. Her website states, “I am an artist, writer, a researcher, and a visiting fellow at the Information Society Project at Yale. My work – usually a result of extensive online and field investigations- melds information with photographs and texts and explores the power that photography has in wielding state and corporate secrecy.”

For the container ship residency Batashevski chose to bring a hand built glass container with her on her travels. Within the container was a camera that was programmed to take photos at intervals of five minutes, wherever the container happens to be. CNN described the work: “Comprised of a mirrored glass box filled with water from the Suez Canal, ‘ZIM™’ has been fitted with a camera that takes a photo of whatever is in front of it — the engine room, the ceiling, blackness — every five minutes and uploads it to a dedicated Twitter account, @ZimTmRobot.” The latest images you can see on the Twitter account are from the container’s new world in the Hong Kong art gallery. It will end its journey when the artwork is auctioned – the buyer has been instructed to smash it with a supplied hammer. 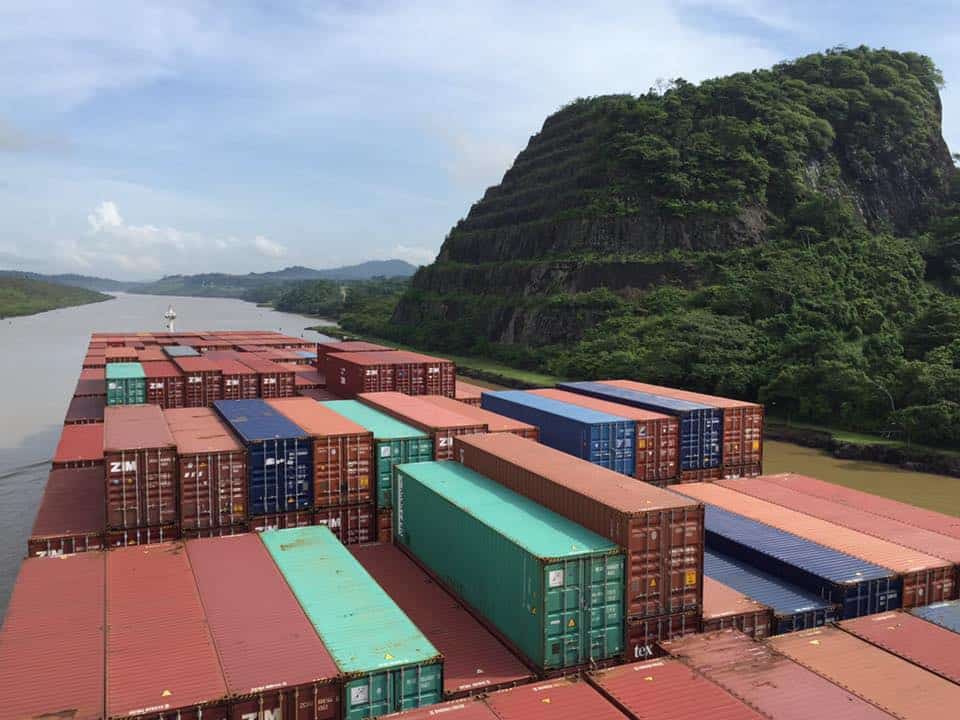 Batashevki, Cohen and van Balen have all been sent to sea aboard container ships through the Container Artist 01 programme. This is a scheme that sets out to look at the shipping container trade in a new light. According to the website, the Container Artist Residency “identifies the shipping industry as a driving cultural and economic force in the contemporary world, and encourages artists to rethink their practice from this unique perspective. By rendering existing infrastructures as new environments for artistic production, ZIM and Container Artist Residency hope to provide artists with a different outlook and a meaningful opportunity for professional and creative development.”

While people who think of the sea as inspiration may hark back to the ‘days of sail’, those at sea on square riggers will have been more concerned about the hardship and routine than the beauty of what they experienced. They would have arguably felt much the same way about their world as those who ply the sea on engine powered steel behemoth container ships do today: it was an industrial practice, albeit one that was romanticised by contemporary writers and the press of the day. While we will never see the famous races between tea clippers from China to London that captured the imagination of the masses today, artists in residency aboard the modern day engines of capitalism may well inspire a different view to the industrial drabness that people view today.

The sailor’s life of today can be stressful and harsh as they spend months at a time away from loved ones. One container ship officer recently told me by Facebook message from the Middle East “I can’t wait to get away from this sandpit”. Only in January after too many months ashore and close to divorce from his wife for being under her feet for too long he couldn’t wait to get out to ply his trade. The sea is a tough mistress for the professionals who work upon it, yet still a draw for those who seek to understand the metaphysics of its beauty and power.