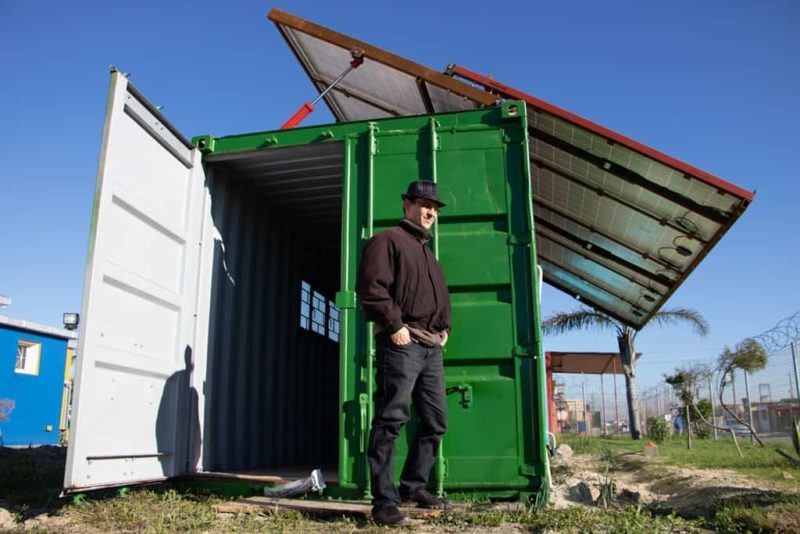 South African James van der Walt came up with the idea in 2014, where a 3kW solar array sits atop a shipping container. In many parts of South Africa sunshine is the norm so a solar array is a great way to get electrical energy to the masses who live off-grid. It has an inverter for AC power and batteries for those days without so much sunlight. Another great aspect is the components have been sourced from South Africa (where possible) to benefit the nascent tech and engineering economy there.

Initially the system was sold to small enterprises that otherwise had to operate without electricity in the South African bush. A tailor’s and an ice machine were two businesses that got off the ground soon after it went on the market.

What about an ‘energy kiosk’ that sells charges for phones, laptops and other machines?

Lack of connectivity to the internet is increasingly seen as a poverty issue in this world (though like those who dream of living in the woods in a container home, it might not sound too bad!). The idea is that connectivity enables access to the greater world of information and goods exchange.

For kids in the bush, connectivity enables them to stay at least in touch with the ‘real world’, and education is one of those things that is heavily reliant on access.

This is why a solar power system that costs 5 Rand (AUD 0.50) per phone charge is quite cool. It also means kids can have a modern education, no matter how far they live from an urban centre. 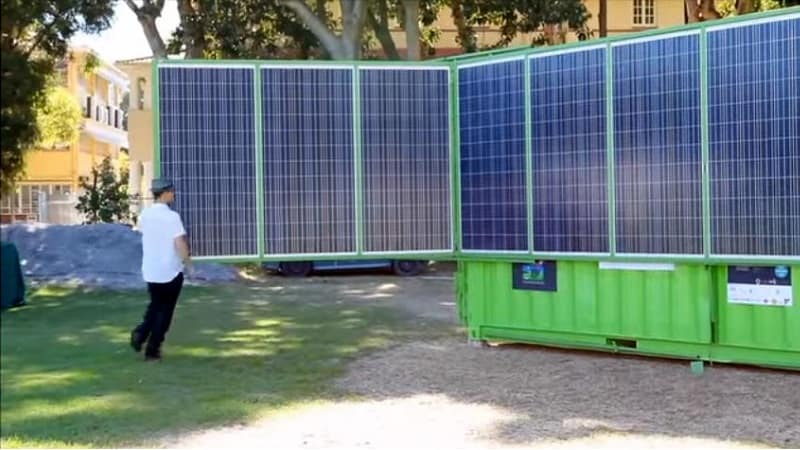 Very quickly after it had been developed the South African government saw the potential of the system.

Creamer Media’s Engineering News reported in 2016, “Government estimates that 2,500 off-grid schools in Gauteng, which are typically located in informal settlements across Gauteng, require support.” Yup – that’s 2,500 schools in just one province of South Africa, and tens of thousands of kids who could benefit from such a great idea.

The same article reported its potential benefit to the whole continent: “The plan, therefore, is to supply a pilot for Mozambique in the next year, and, potentially, a pilot in Nigeria, Van der Walt said, stressing that it is vital to gain a firm foothold for the system locally.”

Peculiar to South Africa is how angry people get at those who rule and the ‘system’. One of the reasons this is called the ‘Power Turtle’ is that it can automatically fold its solar array into itself should people start throwing rocks.

“The need for a container that can defend itself became clear when a previous model was damaged during a service-delivery protest at a school in 2016. “The ladies that worked in the container energy kiosk had no time to use the original (manual) system to fold away the panels,” says van der Walt. The renters locked themselves inside the container, but the panels where left exposed to flying rocks and rubble.”

The redeveloped system can fold itself up against attacks in just under a minute. That can save the owners a lot of money in repairs and protect their investment. The system now unfolds automatically at dawn and reels itself in at dusk so attackers can’t have a go in the dark of night.

We’ve reported on a few container power systems here at the Gateway Gazette, from a Chinese nuclear reactor designed to advance its regional interests, to more sublime things like wind turbines. In terms of connecting those who are otherwise living in a different age to ourselves, the Power Turtle is no bad thing!

If you have similar ideas then drop us a line to see how we can help with our full range of used shipping containers.