Quiet Shipping Container Architecture – A New Phase For This Discipline?

Shipping containers have a reputation for their industrial, hard looks. They have even been exploited in architecture to appear in this way, often unpainted and untreated so there’s not much movement away from their original past. In two examples we will show you that this doesn’t always have to be the case. A Brazilian and an Australian hideaway have both been designed to sit quietly in the natural environment and both blend in and celebrate the natural world around them. 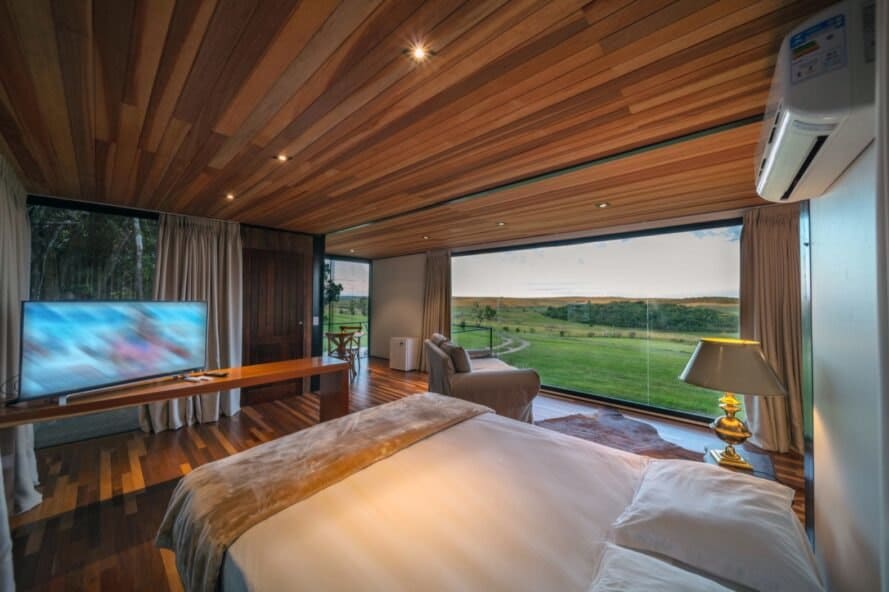 Located in Balsa Nova, Paraná in Brazil, the holiday escape suite is composed of one shipping container that has been modified with extensions for extra space. Its inner and outer decor enables it to sit quietly and unobtrusively in the fine environment outside.

The plot it sits in is farmland with virgin forest behind and beyond. As such, those using the Cainã Refuge can sit inside and feel part of the world in which the refuge rests. With large windows there is a great connection between inside and out.

It isn’t just windows that create the connection. Cladding, floors and ceiling are wooden planking that softens the appearance and gives a natural feel to the hotel suite. According to the architect behind the development, Bruno Zaitter:

“In this natural space marked by a wide green area and the characteristic geology of the site, the Refúgio da Cainã contemplates a simplistic structural concept that reveals the connection of the interior with the exterior by the minimal intervention in the natural environment. It has in its essence, the relation between the artificial structure and the natural universe, where the concept of the project is to harmonize with nature without trying to disguise it, revealing its straight lines as opposed the curved and organic lines of nature.” 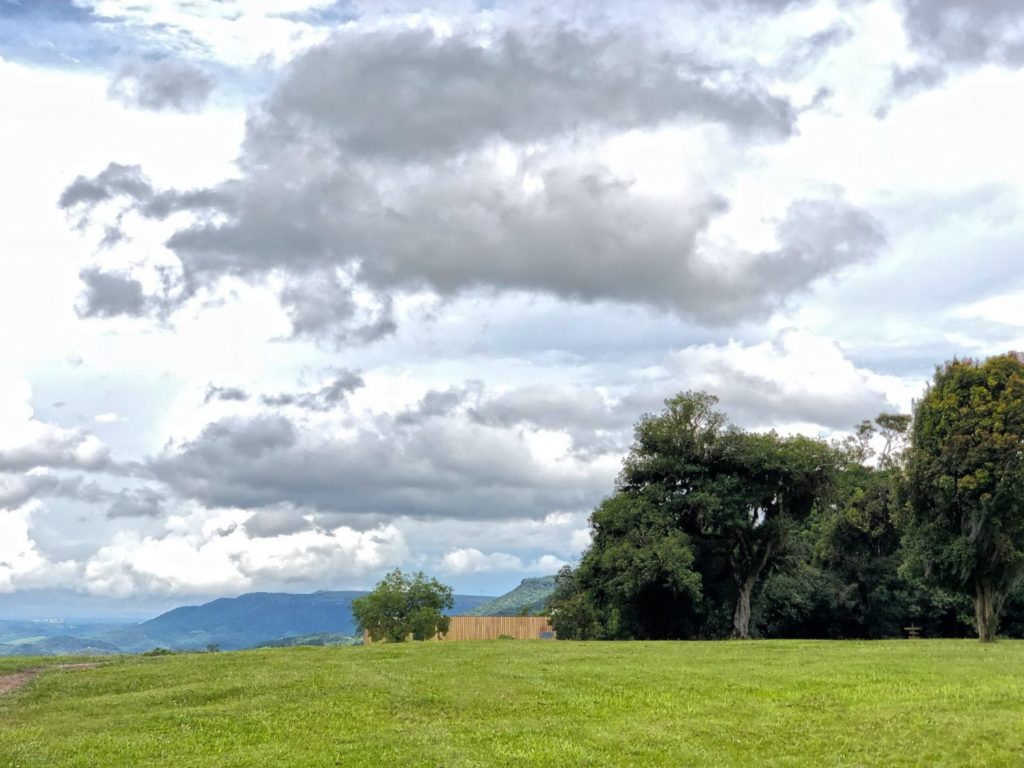 Let’s face it, life outside near the Equator isn’t always cool sunshine and comfort. That’s why the internal luxury is important in the Cainã Refuge. You don’t always need to be outside to appreciate the world around you – and can hide from the weather if too hot, muggy or the rain falls. A luxurious bathroom with large corner bath sits at one end of the unit, with a big bedroom and sleeping area making for an escape from the world outside.

As with the Australian development we revisit in the next section, the Cainã Refuge is designed as a place for city dwellers to escape their world and to enjoy the peace and quiet that a place in nature can afford. Zaitter again:

“The structure becomes a simple base of support, appearing to be floating and favors a lifestyle in permanent contact with the natural environment. It translates a state of mind that reflects in a haven of urban confusion, where the user retreats to appreciate what really matters: the time.” 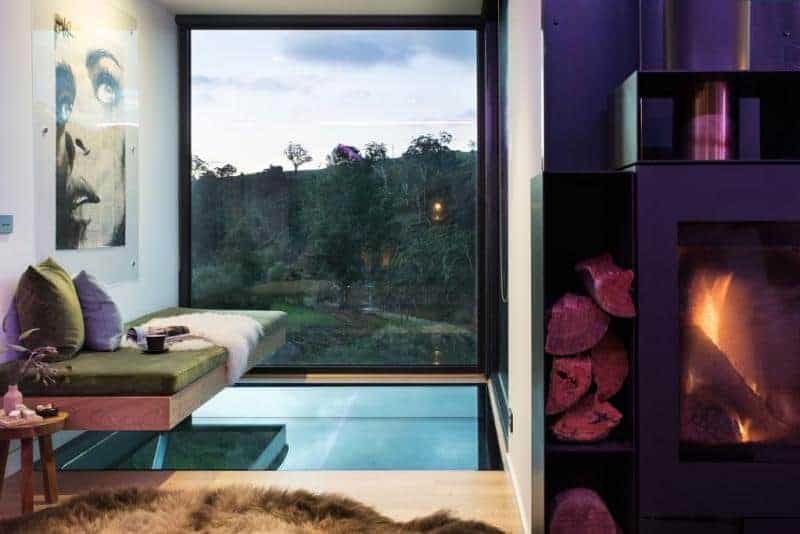 In December 2019, we at Gateway Gazette looked at a similar development in Daylesford, Victoria. The Clifftop at Hepburn retreat takes a similar approach to the Brazilian retreat above. It is designed to sit quietly in the environment and enable those who go to enjoy it to completely connect with the world outside as well as with one another inside.

Yes, the Clifftop at Hepburn development is built with romance in mind, but so is the Cainã Refuge – they take the same idea after all. Both are meant to be capsules for city dwellers to be surrounded by nature without it encroaching too much – a place of beauty and peace without the carbuncles such as bugs, snakes and other beasties, not to mention temperature extremes ruining the experience of being almost at one with Nature.

The Clifftop suite has a similar vernacular to the Brazilian one with its large windows and exquisite views that add to the comfort of the luxury within. Cities and city life are hard edged and fast-moving, two elements that the hotel suites are designed to remove from their guests’ experience. They are places for time to stand still for those for whom time and speed can be overwhelming and pressurised.

At the top of this article we pointed out that containers as building blocks are often used as stand-out, hard-edged developments. At their simplest they can be jarring and brutal in appearance. Where they are made into city entertainment venues and even homes that seek to make a statement, so this is useful.

Container architecture however seems to be evolving. Shipping containers are after all very good building blocks but do not need to be so obvious and loud in their use. The two examples we highlight above show that they can just blend in with their inner and outer appearance only obvious through the constraints of their size.

As we showed in December’s blog on the container home celebrated in Grand Designs Australia, the container building blocks can be arranged in a variety of ways, with openings in the walls, roofs and floors used to create a variety of imaginative spaces – double-height ceilings, glass floors and wide living spaces can be created.

Shipping container architecture seems to be moving on to a more sophisticated phase where now they are being used with as much discretion as breeze blocks and bricks to create a variety of forms. They sit within the form as opposed to being the form themselves.

There are a lot of advantages to using containers as a building material – they are cheap, easy to build and can produce some great buildings at a fraction of the cost of bricks and mortar. Affordable housing is a big thread we cover here at Gateway, where high quality housing is built for a far lower cost than can be built using traditional means. This is why it appears that architects are moving into a new phase of buildings using the blocks. When your child builds a Lego building you see the building, not just the bricks used – at an ‘adult’ scale this is the beauty of what some refer to as ‘cargotecture’.

Inspired? Get in touch!

Here at Gateway Container Sales we can provide you with the containers – used or new – for what you need in a shipping container based housing, hotel or office development. Just get in contact with us to discuss your needs!