There are plans to build a theatre in Detroit, in the US Midwest, modelled on Shakespeare’s Globe Theatre in London, England. It will have many of the foibles and eccentricities of the original theatre that was built nearly 500 years ago in the slums of London, but be built of a far more modern and recognisable building block – shipping containers.

Let’s look at the history of the Globe and get to grips with what Shakespeare was about (without going into the finer detail of plays like Hamlet and their rather difficult English) before looking at the concept being sold to Detroit right now. 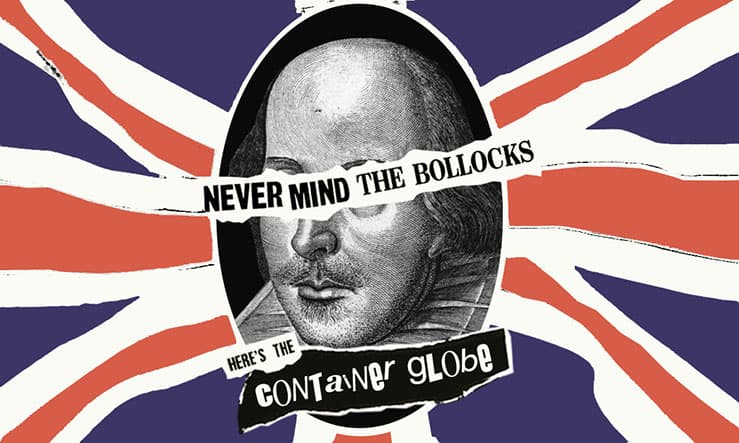 Shakespeare was an acute observer of humanity. Many of his plays were about humanity’s faults and foibles, and tell of its frailties that even matter today. Is US President Donald Trump in fact Macbeth?

The Sparknotes website explains the story of possibly the most famous of all Shakespeare’s plays: It is “the story of a brave Scottish general (Macbeth) who receives a prophecy from a trio of sinister witches that one day he will become King of Scotland. Consumed with ambitious thoughts and spurred to action by his wife, Macbeth murders King Duncan and seizes the throne for himself. He begins his reign racked with guilt and fear and soon becomes a tyrannical ruler, as he is forced to commit more and more murders to protect himself from enmity and suspicion. The bloodbath swiftly propels Macbeth and Lady Macbeth to arrogance, madness, and death.”

The Donald is certainly a very troubled, somewhat tyrannical individual who’s in a situation he might be incapable of dealing with. I’ll leave it to you to say whether he is mad…

The Bard told rather biased tales of the UK’s history and his plays were acted out before his then Queen, Elizabeth I. One site explains of the Richard III play, “When Shakespeare wrote this play, Queen Elizabeth I ruled England; Elizabeth was a descendant of King Henry VII, the ruler who overthrew Richard. Thus, the official party line of the Elizabethan era was that Richard was a monster who was not a legitimate ruler of England. It would have been thoroughly dangerous for Shakespeare to suggest otherwise.”

In this we see Shakespeare as someone who was a man of his time but also one who could see things we do even today in our own leaders and fellows. That’s why generations of children have had to plough through the almost impenetrable Old English language to improve their education.

When you think of attending a Shakespeare play you tend to imagine a bunch of people with high cost private education sitting quietly and absorbing the atmosphere and laughing at in jokes. While the preppy types with rich daddies do form a large part of the audience today, it wasn’t always the case. Lacking TV or Facebook in those days, people of all stripes used to go to the theatre and the mix (and stench) must have been quite something.

The original Globe Theatre was built in a rough part of London where even Queen Elizabeth herself used to go to torment bears and bulls to death for fun. Prostitutes and pickpockets hung out while the educated and wealthy elite used to visit the place somewhat nervously outside but to let it all hang out once inside.

One website, referring to the acoustics of the Globe stated, “Lines spoken by actors in the Globe Theatre did not always reach the ears of the audience. One problem was bad acoustics. Another was crowd noise. The groundlings in the yard hissed and booed—or cheered and clapped—in response to what a character did or said. Moreover, they had a tendency to chat among themselves.

Consequently, actors usually had to recite their lines with ‘boom and thunder’—meaning they had to have a voice of robust timbre—while helping to convey their meaning with exaggerated gestures.” In short, actors had to yell to be heard over the audience who were loudly taking the piss out of each other or just generally catching up with people they hadn’t seen for a while. The atmosphere, tinged with copious amounts of alcohol, would have honestly scared the willies out of your time travelling snob from the 21st Century.

Shipping container Globe – a modern reflection of the old

The first Globe was built of wood and was dismantled to be moved across London Bridge to the site the modern one sits at today when the lease of the land ran out. One history of the Globe recounts:

“When the owner of the land on which The Theatre stood threatened to demolish the building after the lease expired, Richard and Cuthbert dismantled the playhouse and used the timbers for construction of the Globe on the south bank of the Thames in a district where two other theatres, the Rose and the Swan, were already competing for the coins of London playgoers.”

The one being proposed for Detroit will be made of shipping containers that can in theory be dismantled and shifted from place to place—so there is a similarity between the two theatres despite their very different building materials.

The Arch Daily website explains how it will be put together:

“The bulk of the theatre is made up of the shipping containers forming the seating gallery, which are all modified in the same way and stacked into a tower of three such modules. Interestingly, while steel sheets are not usually the material of choice for performance spaces, the design team found that the containers’ corrugation, and its effect on acoustic reflection, actually lends itself well to housing live performances. The rest of the shipping containers are also cut through and added to, forming the backstage and balconies, with stairwells connecting the separate areas. The entire structure is then draped with a “tough industrial mesh,” providing shelter from wind and rain while also letting in daylight. The mesh will also help soften the sound of rain for those inside the theatre”.

Where those at the plays in the 1600’s weren’t just there to listen (and couldn’t have if they wanted to due to the hubbub of the rest of the crowd) the fact that the acoustics have been improved is somewhat more suitable for the discerning theatre types of today. They may well be able to hear more than their fellows at the London Globe due to the unintended consequences of the corrugated shipping containers that form the fabric of the venue.

Punk? At the Globe?

“Our idea is simple: to build a modern Globe (or Globes!) from re-purposed shipping containers and commonly available building materials and have a venue not only for putting on big gutsy Shakespeare [plays], but also for music, dance and live events. The Container Globe will be a place that both refers back to Shakespeare’s classical Globe, but is also modern, vital and new.” And yes, punk acts will play at the theatre too, bringing back the rowdy atmosphere that prevailed in the 1500’s and 1600’s.

Arch Daily again: “Founder Angus Vail hopes this change in building component will give the Container Globe both a “punk rock” element and international mobility, making it as mobile as the shipping containers that make up its structure.” Vail counts King Lear and The Sex Pistols as influencers to him wishing to recreate the Globe in this way.

Now you understand the purpose of the theatre in question, you may find that the idea of having a punk concert at the Globe is actually quite a good idea. Though The Sex Pistols’ God Save the Queen might have led to Johnny Rotten dying a very public and grisly death for taking the mickey out of the Virgin Queen, old Shakespeare would definitely approve of the nihilistic philosophy of the man behind the current project.

There was a crowdfunding campaign for the project earlier this year that would go on to raise US$42,553. To get the project off the ground Vail wrote a message at the close of the campaign that said, “we’ll continue transforming shipping containers into seating galleries and stage – the components of a real Globe. A steel Globe where we’ll be hosting world class Shakespeare from the London Globe, and Shakespeare from our friends in the US Shakespeare world, and plays from local schools – and even (with pleasure) very loud punk rock bands. And very loud opera singers too.”