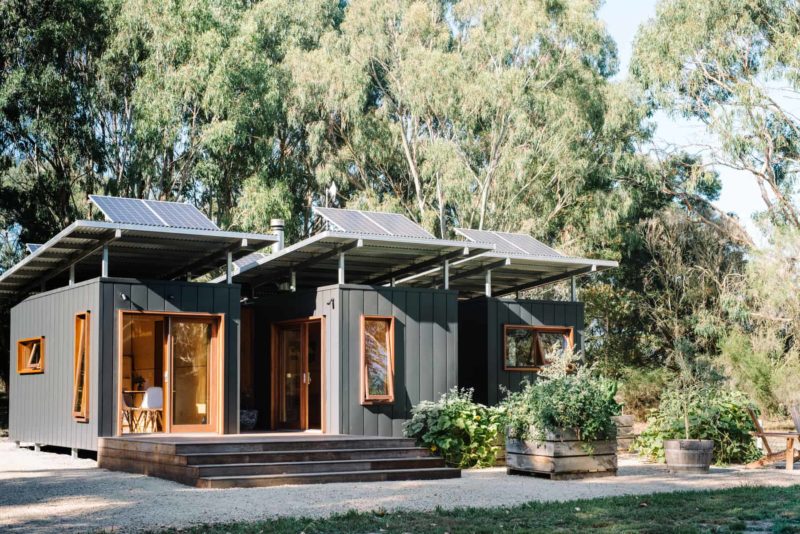 So what can life be like living in a shipping container home? The truth is that if the place is well thought out – and money spent on making it comfortable – then it can be a good space to live in. Rather like any other architecture, it can be jolly uncomfortable and a difficult place to live in if thrown together and ill thought out in construction.

Let’s start with how to do it right. 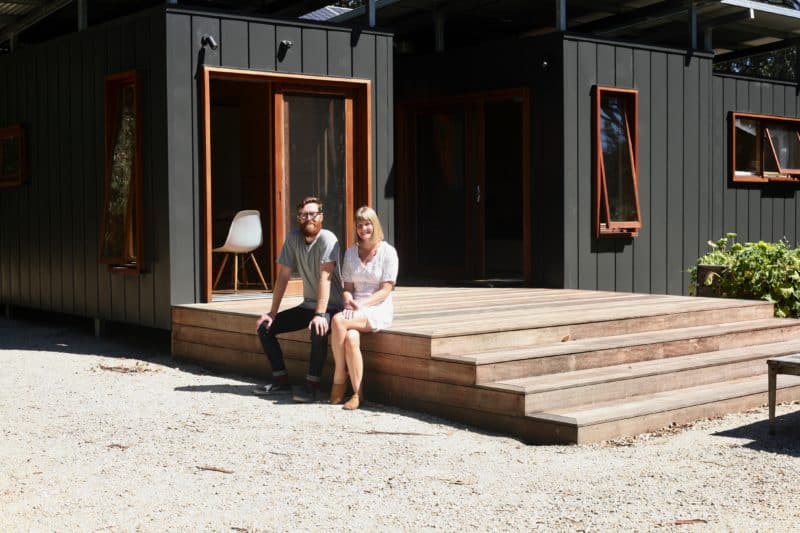 A young couple in Australia told local journalists how good life is in their shipping container home. Amy Plant and Richard Vaughan met while Richard was travelling the world and his Australian love slowed his travel somewhat! In the UK and Europe living spaces are relatively small by comparison to here in Australia, but that can be a good thing.

In smaller spaces there is less maintenance to do and cleaning the place can be a doddle by comparison to somewhere much larger. Energy bills can be very low (the couple pay almost nothing thanks to the high energy efficiency of the building). The cost, in this case at $140,000 all in, is much lower than you might find in another building that also comes with five acres of land!

Speaking to Domain.com.au the couple said, “We saw a lot of friends who couldn’t do things, saying, ‘Oh, we’ve got to clean the house for a day’. We thought, we don’t want really to do that – we want to get out and enjoy life. We thought, small footprint home, it won’t take as long to clean, and also the cost – we didn’t want a high debt level going into having a family. And we love travelling so much that we didn’t want to change our lifestyle too greatly, but we still wanted to be homeowners.”

Given you can buy a shipping container for as little as $7,000, you can see that the couple spent a lot of cash – $133,000 – in making the place habitable. Vaughan is a carpenter and he worked hard in making all the furniture and fittings dual purpose for storage wherever possible. That allows for life in a small space without having to get rid of all your belongings – it is indeed possible to live comfortably in the home and to accrue all the trinkets and stuff you might in a normal home.

In this regard they told the journalist, “There’s that quote about ‘working for the house we can’t afford, to impress people we don’t really like’ … It’s about just really being happy with the life that we have. And we love it. We’ve got a veggie garden and live by the coast. We spend so much time outdoors. And it’s really integrating that indoor-outdoor lifestyle that Australians do so well.” 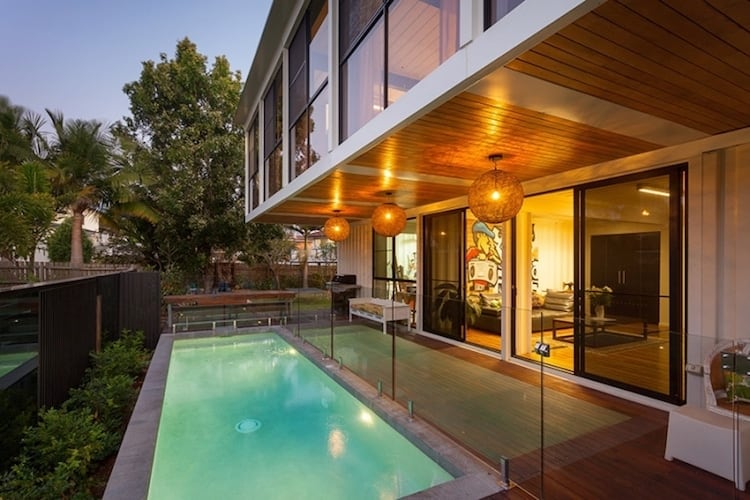 It needn’t be tiny either. Here at the Gateway Gazette we have touched time and again on mansion-sized container homes, like the Ziegler build’s Graceville Container House in the photo above.

If you are a young couple like Vaughan and Plant you can start small and as your family grows you can add to it. That’s one of the beauties of living in a shipping container home – it needn’t be the same at the end of your time there that it was when you moved in. They told, Domain.com.au:

“I guess coming from moving around a lot as a kid – being a builder’s daughter – we never had forever homes. So my sentimental value of the forever home is a bit skewed. But we kind of thought, ‘Well, let’s just build for what we need’. Because we don’t know where we’ll end up. We didn’t really want owning a home to dictate everything.” 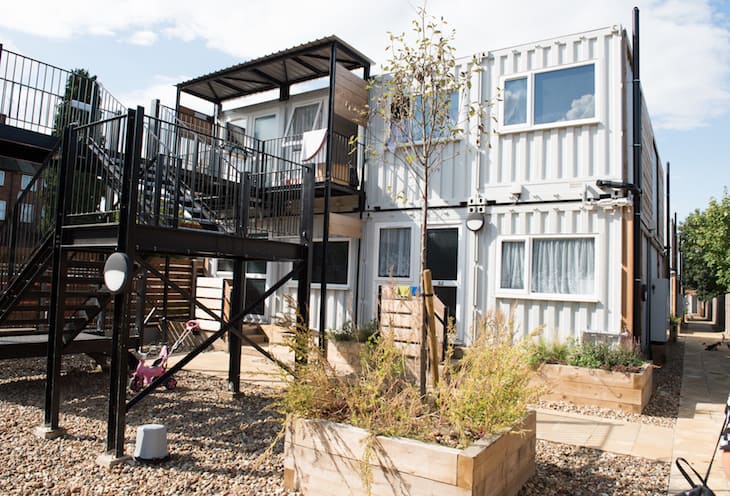 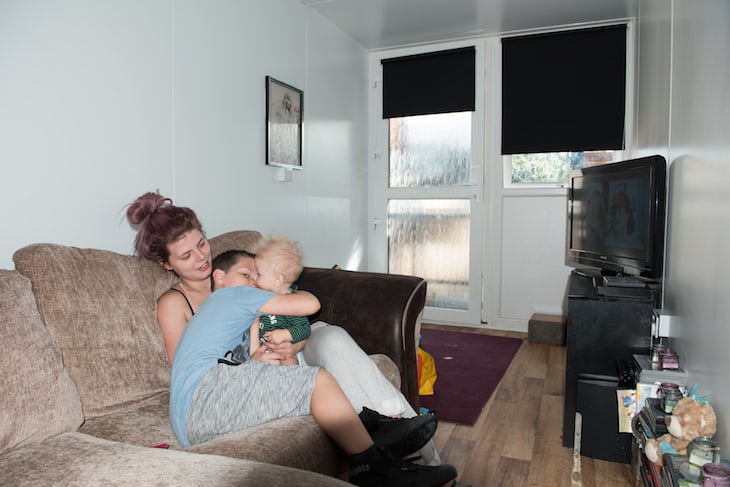 Life can be tough living in shipping container housing too. A group of families told the UK news site the Londonist just how bad life can be. All have been victims of the notorious London private rental market and, with kids, were able to at least avoid time on the streets. Even so, the site at Marston Court in London is not a good place to be.

Forgetting the crime and social problems for a moment – though poor housing is known to contribute to these issues – the homes are badly made and ill thought out as economics outranked decent architecture in this instance.

The Londonist reported that for a single mother and her two kids, “Inside, there are just two living spaces for Sophie and her two boys, plus a cupboard-sized bathroom at the back.” Internet companies are reluctant to drill through the steel walls, so the tenants are cut off from the internet – a major issue in one of the most connected countries in the world.

While well insulated from the British winter, it can be brutally hot inside in the summer thanks to poor ventilation and air movement within these hutches. The only windows are on one side, preventing air flow even further for the residents.

It is considered ‘temporary accommodation’, though in London there is a real shortage of social housing to move into from there. The Londonist did say something positive here, though that is less positive about the housing itself and more negative about private rentals in London:

“The whole thing wouldn’t look out of place on a university campus, with compact interiors that are — if we’re honest — a lot nicer than some private accommodation you’ll have the misfortune to encounter in London.”

Judging by the extremely low rents in the Marston Court block – just AUD$27 a week in one of the most expensive metropolises in the world – the council hasn’t had to claw back so much money from the investment. This adds to the idea that they have thrown together something cheap to store the most desperate of homeless people.

From these two examples it is very clear that shipping container housing really is only as good as you make it. If, like the young Australian couple, you set out to build something very comfortable and that suits your needs then life in a shipping container home, even a smaller place, can be very comfortable. Imagination and the dimensions of the box are largely your only constraints with the imagination extending this space as far as you could possibly want to go!

If the attitude to building a shipping container housing complex is purely utilitarian – as a ‘store for homeless people’ then life inside can be a lot less comfortable. As can be seen with the 2017 Grenfell Tower blaze in London, housing authorities aren’t the best at housing those in need. A well thought out, well designed social housing block can still cost very little but have much happier tenants within!

Have your own shipping container house in mind?

Based in Brisbane, Queensland, Gateway Container Sales has been helping people with shipping container conversions for many years. Whether for storage purposes or for mansions, our team can help you turn your dream into reality. Contact us today and we will be happy to help! Get a free quote.