The US$5.5 billion Panama Canal Expansion Project has opened, allowing much larger container ships to cross the Americas far more quickly than they could before. Is this good news for shippers and trade as a whole? The immediate answer is, to a point.

The cost of getting goods from China to US clients via the East Coast should fall some but the goods themselves won’t get to their destinations as quickly. Obscene amounts of money have been spent preparing for larger ships coming into US East Coast ports, but the returns won’t be made as quickly as some hoped. Let’s look at this in some detail, firstly by looking at the Panama Canal.

The Panama Canal was originally opened in 1914, and served global trade well for nearly 80 years. Unlike the Suez Canal that travels through the Middle East, the Panama Canal has to cross a mountain range so has a number of locks. The size of the locks limited the size of the vessels that could pass through, so a design of ships called the Panamax emerged that in the case of container ships limited them to carrying around 2500, 40ft containers.

Global trade grew at a fantastic rate even after the 1980’s and China started exporting goods to Western markets. Since goods could be made far more cheaply in China than they ever could in the West, hundreds of thousands of companies in the West had their goods made in China. This fed demand for ever bigger ships.

Currently the biggest container ships that ply the world’s oceans can carry around 19,000, 20ft containers and are far too big to use the Panama Canal, pre or post expansion. The decision was made by the canal authorities to build new capacity in a third lane across the isthmus of the Americas and to make this third lane big enough to carry even larger ships.

Two years after the planned completion date and $5.5 billion later the Panama Canal expansion project was opened in June this year. The new lane can take ships carrying up to 13,000, 20ft containers – almost three times the capacity of the older lanes. 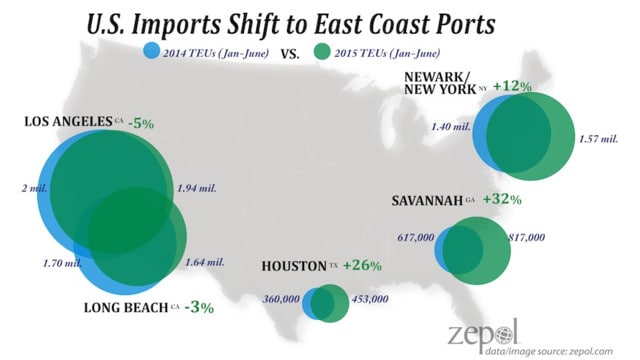 If you think that $5.5 billion is a lot of money, the amount that US East Coast ports spent on making their container terminals big and deep enough for the larger ships they would accommodate makes that figure look like loose change. It is estimated that the ports have spent close to US$150 billion on bigger cranes, longer docks, deeper channels, raising road bridges and laying train lines to match the projected demand from the larger ships.

Up until this massive expansion, goods headed for New York and the Gulf Coast ports came west around the world via the Cape of Good Hope and the Suez Canal, and only the smaller Panamax ships went through the Panama Canal. Over 70% of containerised trade to the US came in via the US West Coast ports and then onward by train to their destinations across the US. 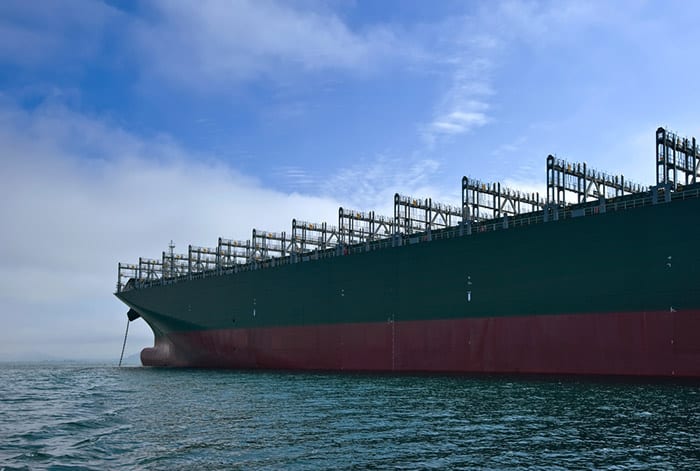 In amidst all this spending global trade didn’t grow as quickly as projected. There is a well known overcapacity of container ships globally and this has depressed prices to the point that even the biggest container lines are just about making a profit.

Before the expansion of the Panama Canal, US East Coast ports were taking more and larger ships. It is estimated that East Coast ports are now taking 33.9% of container trade to the US as against 29.1% before the ports expanded. Not a huge jump by any means, and a sign that the vast sums spent will be clawed back very slowly.

However, for people who want their goods delivered from China to the eastern US, the prices will fall simply because the ships travel less distance. From around $1,100 per 20ft container via the Suez Canal, shippers can now expect to pay around $850.

Build it and they will come?

So, to the question of boosting trade. In theory, low logistics prices should help boost trade. As has been seen through the last few years of overcapacity across the global fleet of container ships, prices are rock bottom already. It hasn’t caused anything like the boom that would occur if the idea of low logistics costs boosting trade was true. It will help businesses sell goods with a higher profit margin and this will make those individuals happier. Increased capacity at a number of ports will just lie empty.

Global demand needs to increase before the potential of all this infrastructure, engineering and shipping capacity can be fulfilled and that requires a lot more than cheaper logistics – we need to get back to the boom times of large growth in trade, and no one has quite figured out how to get back to those heady days yet. Until they do large, half empty ships will continue to visit enlarged, half empty ports.

This post is brought to you by Gateway Container Sales out of Brisbane, Australia. We sell on used shipping containers for reuse in a variety of ways, check out our blog for ideas and more articles. If you want to reuse a shipping container in any way you could imagine, call our sales team to discuss your needs!